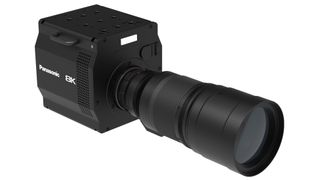 Tech behemoth Panasonic has revealed further details regarding its 8K Organic sensor, at the International Broadcasting Convention (IBC), complete with a prototype AK-SHB800GJ camera unit. While the concept has been on the drawing board for some time, the new information represents a big step forward, not just for a specific camera, but for Panasonic's future video capture philosophy and product road map.

While conventional CMOS sensors have closely associated light conversion and charge storage components, the organic model enables these functions to be discrete, streamlining the process of creating a digital image. The unit employs a sheet of organic photoconductive film placed on top of the CMOS assembly which provides three key advantages to videographers.

Firstly the increased area dedicated to photoelectric conversion - the production of an electric charge relative to the volume of captured photons - enables a significantly superior dynamic range. Takashi Ishii suggests an increase in range up to 15 or 16 stops, compared to a 14EV maximum on existing models. This has huge potential for holding detail in the brightest highlights and deepest shadows, opening up even greater opportunities for post production - think fewer clipped highlights after complex colour grading.

Secondly, the organic film is exceptionally efficient at controlling voltage output, allowing an electronic neutral density filter to be activated, for stepless variable exposure effects.  This should enable a softer gradient transition that optical ND filters.

The third greatest advantage is a global shutter, rather than the more traditional rolling shutter present in the current generation of digital video cameras. This reads information uniformly from all areas of the scene, instead of reading the sensor in sequential lines. The key benefit is a reduction in skew distortion or shutter drag, whereby vertical edges in a frame appear to bend when in motion, or when the camera is moving relative to an object.

One of the most exciting aspects of this Organic 8K CMOS sensor - a current world first - is the possible distribution of the technology throughout Panasonic's imaging products. The apparent plan is to roll out the sensor in time for the 2020 Tokyo Olympic Games. This in itself is unexpected, in light of the firm's earlier statement that they would not adopt 8K video until 2022. However if Takashi Ishii's predictions become a reality, we could start to see Organic 8K tech in Panasonic's cinema cameras, followed even by consumer products, such as the Lumix range.

Whatever the outcome, we look forward to testing the organic advantages for ourselves, be it in broadcasting or consumer photographic applications.

L-mount lens roadmap: Panasonic promises 42 lenses by the end of 2020