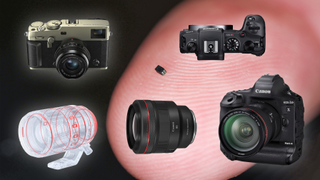 The photographic industry is so often a reality built on rumors, but this week's camera news has been dominated by actual, physical products that are here right now… well, most of them.

Both Fujifilm and Canon made headlines with their new flagship cameras – Canon's won't be available for a while yet, but we actually got to see one in the flesh, while we took Fujfilm's out for a test drive.

Canon also teased a brand new, high-end mirrorless camera, and also gave us a pair of new high performance optics to play with. And finally, the world greeted the smallest ever camera that's the size of a grain of sand!

The EOS-1 series has been around for 30 years and, in an unofficial celebration, the Canon EOS-1D X Mark III celebrates the occasion by being featuring some of the most advanced technology ever seen in a Canon camera.

Proudly proclaimed as “the ultimate camera for sports and wildlife” that ushers in “a new era of AF speed and accuracy”, the 1D X Mark III’s headline feature is undoubtedly its autofocus performance…

Fujifilm X-Pro3 will change the way you shoot

The new Fujifilm X-Pro3 is likely to cause a stir in all sorts of ways, but its headline feature is an extraordinary – some might say bizarre – rear screen that faces inwards not outwards and only becomes visible when you tilt the screen downwards.

It sounds barmy but this inside-out screen, which we first reported in September, could actually be a stroke of brilliance. Why? Because it will stop us staring at the picture we’ve just taken and make us concentrate instead on the picture we’re going to take next!

You can get the full story in our hands-on Fujifilm X-Pro3 review, where we take a closer look at many of this new camera’s other key features…

Rumors and speculation have been rife about a Canon EOS R pro version – which many have taken to calling the ‘Canon EOS RX’ – ever since the original model released last October. Now Canon has officially confirmed to us that something is in the works.

Not only that, but the manufacturer also told us that such a model would definitely have dual card slots. And if that weren’t enough, within the same conversation, it just so happened to mention that it is hard at work developing in-body image stabilization (IBIS).

“There’s a high-end EOS R in consideration,” said Canon UK’s product intelligence consultant, David Parry. “So we are considering bringing a high end EOS R to the market. If we do, it will have dual card slots, it will be that sort of level, and under development is in-body image stabilization. So we are looking at this technology, it is in development with us…”

Canon has done an amazing job of fast-tracking development of lenses for the Canon EOS R, and this week saw the launch of the two latest RF mount optics – each of which fulfills very distinct roles.

The Canon RF 70-200 f/2.8L IS USM completes the trinity lens line-up for the system. A remarkable piece of design, it's both 27% shorter and 28% lighter than its EF-mount predecessor!

World's smallest camera is the size of a grain of sand!

A specialist medical camera that measures just 0.65 x 0.65 x 1.158mm has just entered the Guinness Book of Records. The size of the grain of sand, it is the camera's tiny sensor that is actually being entered into the record book.

The resolution may seem low, but the OVM6948-RALA camera is designed to fit down the smallest of veins in the human body giving surgeons views that will aid diagnosis and with surgical procedures. Previously the surgeon would carry out these operations blind, or use a much lower-resolution fibre optic feed…

Read more: World's smallest camera is size of a grain of sand