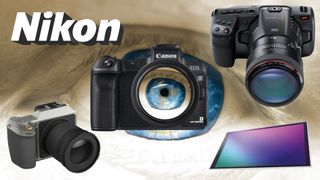 This week's camera news was dominated by bold technological developments in the photographic industry – along with an audacious bit of copycatting, and a rather dire bit of bean counting.

A Chinese clone of the medium format Hasselblad X1D has been registered online. However, this clone comes from a very specific Chinese company – that being DJI, the drone camera specialist that is also majority owner of Hasselblad.

It seems probable that the clone, which doesn't yet have a product name, will be a fairly straight rebadged version of the X1D intended specifically for the Chinese or Asian market.

The "X1DJI" could be a clone of the original Hasselblad X1D 50C or the recently announced Hasselblad X1D II 50C. However, the 'new' DJI version has a couple of minor adjustments to the Hasselblad designs…

After a 20-year absence, Canon appears to be dusting off its love-it-or-hate-it Eye Controlled Focus system – a technology that skipped the digital age entirely, as the company hasn't employed it in any of its DSLRs.

Previously used in Canon's film cameras, the tech enables you to move your focus point simply by looking at it – the camera detects where your eye is looking and selects the point accordingly.

Xiaomi has announced a belief-beggering 108-megapixel camera phone. By far the highest resolution mobile device ever, this phone will also have a higher megapixel count than any commercially available "proper camera" on the market.

If we're going by resolution alone, this will be far and away the best camera phone ever; the sensor possesses even more megapixels than the 102MP medium format image sensor in the Fujifilm GFX 100 (which is intriguing, as Samsung and Fujifilm recently partnered to produce next-gen Isocell Plus image sensors)…

This is big news for professional videographers, from film-makers right down to YouTubers. It’s partly because of the increased resolution, and partly because this opens up a whole world of highly-regarded Canon EF mount lenses to film-makers…

As if there wasn't already enough doom and gloom in the camera industry, Nikon has released its first quarter FY2020 financial results. Hit by a shrinking market and the initial costs of developing Z-mount lenses, Nikon has reported a huge 71% decrease in earnings and an almost 15% drop in revenue.

Nikon's results presentation says that although it is enjoying steady sales of full-frame mirrorless cameras and interchangeable lenses, its revenue has been affected by the reduced sales of entry and mid-range DSLR cameras in Asia including China.

Nikon looks set to continue expanding its sales of mirrorless cameras and lenses, but this downward trend of digital SLRs and compact cameras is expected to continue to affect its revenue…

Read more: Is this the end of Nikon as we know it? Fiscal report shows 71% drop in earnings