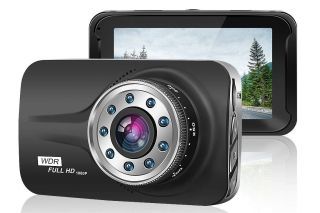 Dashboard cameras aren't just great gift ideas – they're also potentially life-saving ones. So these dashcam deals won't just save you a bit of cash, they could potentially save the day should the worst happen.

While dashcams are still primarily about providing CCTV coverage for your vehicle, modern models do far more than just film what's in front of them. Some possess driving assists, give directions, accept voice commands, detect an impact or suspicious movement when stationary, record in the dark, and some can even alert emergency services in the event of a crash.

And of course, many people even use GoPros and action cameras as dashcams, given how easy they are to mount on your dash or windshield. So you might want to check out our GoPro deals deals page as well!

Nextbase 122 Dashcam: $58.14
A compact design, which will discretely record the road ahead at 720p resolution at 30fps. Has a night vision mode that allows it to keep recording all day and night. US dealView Deal

Nextbase 522GW Dash Camera save £9 now £139.95
This is one of our favorite dashcams, and one we have described as 'Arguably the best video quality available in a dash cam'.  It shoots 1440p at 30fps, or 1080p at 60fps, and offers built-in GPS and a three-inch screen.
UK dealView Deal

Garmin Dash Cam Mini save £10 now £89.99 at Very
A miniature dashcam that is so small you will barely notice it on your windscreen. It gives 140° coverage and records in 108p, storing footage on a microSD card. Wifi compatibility means you can upload clips to your phone using the Garmin app.
UK dealView Deal