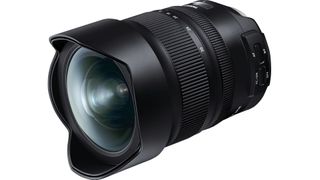 Tamron has refreshed its 15-30mm wide-angle zoom, which was first announced in 2015, unveiling a G2 (second-generation) version to bring it in line with the firm’s other recent optics.

As a wide-angle zoom for full-frame cameras, it should prove popular with landscape photographers. The new Tamron SP 15-30mm F/2.8 Di VC USD G2 (Model A041), to give it its full title, is constructed of 18 elements in 13 groups. It incorporate an XGM lens element (‘eXpanded Glass Molded Aspherical’) as well as several low dispersion elements, all designed to maximise optical quality by minimising distortion and chromatic aberrations.

The front element has additionally been treated with Tamron’s fluorine coating to resist dirt, dust and moisture. This is paired with a moisture-resistant body construction, a combination that should make the lens useful for outdoor photographers.

A built-in micro-processing unit works in tandem with another processor to produce the lens’s vibration compensation (VC) image stabilisation, which Tamron says has scored 4.5 stops according to CiPA standards. This same processing unit also takes care of the high-speed, high-precision autofocus, which also uses a USD ('Ultrasonic Silent Drive') for ultra-silent, high-torque operation. If you need to make small adjustments, there's a manual override option for taking quick, precise control.

The 15-30mm lens carries a minimum focusing distance of 0.28m. It uses a nine-bladed circular diaphragm, and its maximum aperture of f/2.8 is constant right the way through the zoom range.

In both cases are compatible with Tamron's 'TAP-in Console', which allows for quick connection to a computer to download firmware updates. The bulbous front element mean that filters can not be screwed into the front of the lens, but the Canon version does have a rear filter holder for gelatin filters.

The Nikon mount version of the Tamron SP 15-30mm F/2.8 Di VC USD G2 will be available from September 21st, 2018. Canon users will have to wait a little longer – the Canon-fit version is expected to be available from October 12th. The price in Europe for the lens will be €1,449; we will update with UK and US pricing when it is announced.

Quiz: How well do you know your lens techniques?