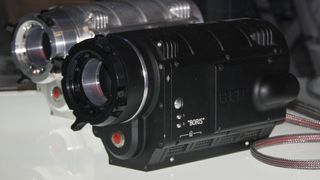 Back in August of this year, we reported that Apple was filing a legal petition against Red's main RAW video patent, the RedCode. This codec captures visually lossless compressed RAW video – and Red's patent meant that anyone who wanted to use that technology would have to pay them a likely hefty fee. However, unfortunately for Apple, a US court dismissed the case this week.

In its petition, Apple argued that Red didn't actually create anything new when it made the RedCode. Instead, it simply combined two pre-existing patented technologies together, including a portable camera system similar to the Red One and a processing technique that would achieve nearly lossless compression optimized for data from a Bayer sensor.

Apple's argument was that Red didn't make a technological breakthrough; while Red may have been the first to combine two patents, it didn't actually create anything itself, so the patent should therefore be cancelled.

However, as compelling as this argument was, it clearly wasn't enough to convince the US court overseeing the case. On November 8th, the patent office officially denied Apple's petition, writing that the company "has not shown a reasonable likelihood that it would prevail in establishing that any of the challenged claims… are unpatentable."

One of the reasons that Red may have won this legal challenge is due to its extensive evidence showing that the company created its Red One prototypes, Boris and Natasha, before 2007. It also released data on the RAW output from these cameras, stating that Boris achieved visually lossless video at 4K 24p. This means that Red didn't simply combine two pre-existing patents, but actually created unique technology of its own.

Red president Jarred Land was understandably happy about the court's decision, stating on the Red User forums, "We are pleased to see our RedCode patents withstand another challenge. To be clear, as I mentioned before, this never really was Apple vs. Red. It has always been Apple + Red, and this was all part of the process defining how we work together in the future."

However, we can be fairly certain that there will be quite a few people who won't be quite as chipper about the situation as Land. If Apple had won this case then the professional film camera world would have become very interesting. Without Red holding the patent for visually lossless RAW video, Apple – and any other company wishing to create and profit from a similar kind of RAW codec – would no longer need to pay Red to license this technology.

This would have meant that capturing RAW video could have conceivably become cheaper and more accessible for everyone from top Hollywood studios to enthusiast videographers.

However, sadly this won't be the case this time around. It's always possible that another manufacturer might take a punt in the future (Sony launched its own similarly doomed petition against Red in 2013 for the same patent), but for now it appears that Red retains its monopoly over visually lossless RAW video.

Best cameras for professionals in 2019: which pro camera system is best?
Best laptop for video editing
Best iPhone camera for photography: the iPhone 11 Pro or an older model?