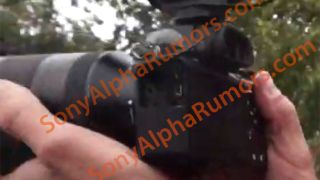 UPDATE 20 DECEMBER: SonyAlphas rumors has confirmed that the leaked image (and subsequent images) are fake – though "a highly trusted source" insists that the Sony A7S III will be arriving in 2020.

ORIGINAL STORY: For months it seemed like we couldn't open our inboxes without Sony A7S III rumors spilling all over the place… then all of a sudden, it went deathly quiet. However, the eagerly anticipated camera now appears to have been spotted out in the wild!

The Sony A7S III – if that is indeed the camera in the image – possesses a body that is much thicker than standard Sony cameras. This would seem to give weight to the rumors that the A7S III would require additional depth to accommodate a heating vent – which, in turn, is required to facilitate the rumored 4K video at 120 frames per second.

The image was posted by andrea_pizzini_photographer – aka the admin of news and rumor website, Sony Alpha Rumors, who claims to be "90% sure this is the new SoyA7sIII [sic] (or #SonyA7sIV).⁠"

This would not be the first time that our first look at upcoming cameras comes courtesy of paparazzi-style images; the Panasonic GH5S was famously first spotted in the hands of Casey Neistat, and Jared Polin was papped while using the Olympus OM-D E-M1X.

In other words, fuzzy and suspicious as the image may be, it's entirely plausible (even probable) that it was captured by somebody who spotted an influencer or ambassador testing the product in the field.

So, what do we actually know about the Sony A7S III? When we last heard water cooler talk about the camera back in September, the word was that it might be able to record 4K at up to 120fps – which would, as noted, require a thicker body with heat vent similar to the Panasonic S1H.

At the same time, it was also claimed that the A7S III would not be capable of 8K – something that, thus far, only the Sharp 8K Video Camera has been able to achieve at the prosumer level (and even that camera has yet to appear outside trade shows and private presentations, though prototypes have been tested by a number of outlets).

While Sony had been a bit grumpy about all the rumors and speculation surrounding the camera appearing online, executive Aoki Yosuke confirmed that the A7S III is in development in August, so it is definitely a matter of when rather than if.

What do you think – are you looking forward to the A7S III, or has Sony missed the boat with cameras like the S1H and Blackmagic Pocket Cinema Camera 6K already beating it to market? Have your say in the DCW Forums!