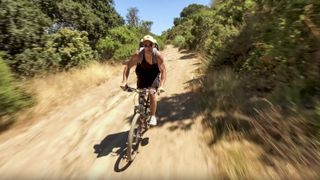 American drone manufacturer Skydio has been teasing that it has a 'spectacular' new autonomous drone coming this fall for a while – and now it has released test footage of the self-flying camera drone in action.

"Building a drone that can actually fly itself and avoid obstacles is an incredible challenge. In fact, we’re the only company that’s managed to do it," brags the company.

"Now we’re raising the bar again on what a self-flying drone can do and how incredibly cinematic its video can be. How? We’ve developed an entirely new and breakthrough flight algorithm.

The drone can do so much more than just avoid crashing. Now it can determine exactly where and how to fly to get the most stunning cinematic shots possible. The type of shots that until now only expert pilots were capable of capturing."

This might sound like marketing hype from a company that has only released one drone so far in its short history, but that one drone was something special – and features in our guide to the best camera drones.

The Skydio R1 ripped up the rulebooks in terms of tracking moving subjects and collision avoidance. This is a drone that could follow cycling you down the mountain path, ducking its way through the branches of trees, to ensure that you stayed perfectly in shot. And it could follow you around as you walked through a building in super-smooth - using two cameras to aid its visual navigation system.

Now Skydio is telling its customers and visitors to its website "If you are thinking of buying a drone, wait. We've got something new coming this fall".

In an earlier email to fans it stated, "we’re about to launch something even more spectacular. It’s the next chapter in fully autonomous flight…. It’s the culmination of everything we’ve learned from our first drone and all of the feedback we’ve received from our first customers.

"We’ve listened closely and worked tirelessly to build something that truly redefines what a drone can do, opening up new possibilities in aerial video. Here at Skydio we’re all about awesome autonomous drones and are super excited to have you along on this incredible journey to push the boundaries of aerial autonomy."

The new footage is very impressive indeed, and has the potential to be absolutely massive within the world of cinematography. We will let you know more, when we find out more!