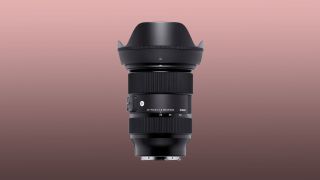 With a dust and splash-proof body and a zoom lock mechanism to prevent the lens barrel from extending unexpectedly, the Sigma 24-70mm f/2.8 DG DN Art lens is a perfect addition to any professional events photographer's kitbag.

If you're a Sony mirrorless camera user and you're looking for a versatile piece of glass that can carry you through almost any professional shooting situation, then the rumored Sigma 24-70mm f/2.8 FE lens might be exactly what you've been waiting for. With the first image having recently been leaked, it appears as if this handy lens will be making an appearance at some point in 2020.

While we can't really speculate on how this seemingly smaller size will impact the weight of the lens, we do hope that this might point towards Sigma's offering being lighter than Sony's own 24-70mm f/2.8 lens.

You might wonder why exactly size and weight are so important - after all, surely the quality of the glass is paramount. Well, yes it is, but when you're a working pro photographer and you're having to lug around all of your equipment over long stretches of time, you can truly start to appreciate the magic of a light and compact lens.

Plus, one of the main draws of investing in a mirrorless camera is that it's ostensibly meant to be lighter than a DSLR equivalent. While this is often true for the camera bodies themselves, some pieces of glass don't quite live up to these expectations.

If Sigma have created a truly light and compact 24-70mm f/2.8 FE lens, we can see this proving truly popular among both amateur and professional Sony mirrorless camera users.

As reported by rumor website Sony Alpha Rumors, the Sigma 24-70mm f/2.8 FE lens will likely be announced on 06 November. However, this will only be an announcement of the lens' development, so we won't actually see the lens on the market until 2020.