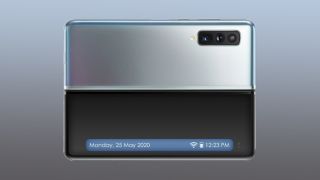 UPDATE 17/06: The Samsung Galaxy Fold 2 is currently due to be unveiled at the 5 August event where the Galaxy Note 20 family will also be announced. However, while we'll get to see some official information regarding the Fold 2, this foldable camera phone might not actually get into the hands of consumers for another few months.

There seem to be a couple of different reasons for this. The first is that apparently the Samsung Galaxy Fold 2's software development process hasn't reached the first version of its bootloader yet, which means that the software isn't ready to be finalized. In addition, production for the Fold 2 isn't due to properly start until August. This means that the soonest the Samsung Galaxy Fold 2 will appear in stores will be either late August or September – but supplies are likely to be very limited.

As reported by GSMArena, this is apparently due to difficulties securing the right amount of Ultra-Thin Glass (UTG), which is what Samsung will be using for the Fold 2's screen. Despite these teething pains, the Samsung Galaxy Fold 2 is expected to be slightly cheaper than the original Fold.

This upcoming foldable camera phone will feature a Snapdragon 865 SoC with 5G support, a 4,500 mAh battery and may even be water-resistant as well.

However, we could be seeing a fully waterproofed Samsung Galaxy Fold 2 as early as fall 2020. According to a patent that was filed by Samsung in November 2019, but published in May 2020, the company is creating a folding smartphone with a waterproof structure that means that the parts inside the housing remain protected against dust and water.

According to Let's Go Digital, to get around the difficulty of waterproofing a design that has various connection holes and hinges, Samsung has apparently used waterproof elements that are placed at specific locations within the housing. This means that water is prevented from entering and the technology is protected.

However, having waterproof housing isn't the only exciting aspect of the upcoming Samsung Galaxy Fold 2. This handset will also apparently have a triple camera unit on the rear of the phone, which will include a telephoto lens with periscopic zoom. Periscope lenses are expensive camera phone technology, as they allow the user to optically zoom into their scene. The Samsung Galaxy S20 Ultra was released with 10x Hybrid Zoom, so it's possible we could see similar technology in the upcoming Fold 2.

As previously reported, we're expecting that the Samsung Galaxy Fold 2 will be released alongside the Galaxy Note 20 series. It's not clear exactly when we'll be seeing an announcement, but the Note series is usually announced around August. However, with both handsets due to be released in the latter half of 2020, it doesn't seem like it'll be long before we see an official launch.