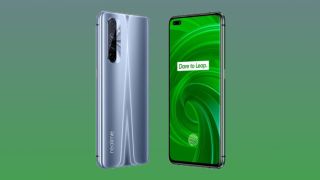 The upcoming handset is rumored to come with 8GB of RAM and 128GB of storage, but it's likely that there will be other memory versions for others to choose from as well. The Realme X50 Pro Player Edition will have a 6.44" 2,400x1,080 pixel display with a 90Hz refresh rate.

GSMArena has also reported that the front of the phone will also have a pill-shaped hole in the top-left corner for the two front-facing cameras. These will apparently be 16MP and 2MP respectively (it's likely that the 2MP camera will be a time-of-flight camera to create background blur in selfies).

Meanwhile, the back of the Realme X50 Pro Player Edition will house a quad camera setup, with a 48MP main camera, an 8MP camera (that's likely to be an ultra wide) and two 2MP cameras (likely to be time-of-flight and macro respectively). The Realme X50 Pro Player Edition is also rumored to feature an in-display fingerprint scanner and a 4,200mAh battery with 65W fast charging support.