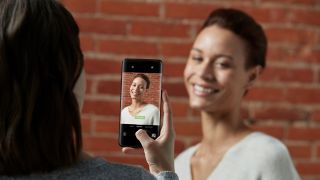 The OnePlus 7 Pro and OnePlus 7 are the first 2019 phones from OnePlus, a company known for making mobiles with high-end hardware that often cost hundreds less than Samsung alternatives.

This crop is different.

The OnePlus 7 is a predictable hardware upgrade of the popular OnePlus 6T, but the 7 Pro is OnePlus’s first “ultra premium” phone, carrying a 3x zoom lens we first reported on two weeks ago. The previous OnePlus 6T is already on our list of the best camera phones.

The OnePlus 7 Pro has a triple rear camera array. The lead camera uses a 48-megapixel Sony IMX586 sensor behind a 7-element f/1.6 aperture lens. Either side of this are a 16-megapixel f/2.2 117-degree ultra-wide, and a “3x zoom” 8-megapixel camera.

This means the OnePlus 7 Pro roughly mirrors the abilities of phones like the Samsung Galaxy S10+ and Huawei P30 Pro, but costs significantly less, with prices starting at £649 (UK) for the OnePlus 7 Pro with 128GB storage and 6GB RAM.

Like other ultra-high resolution phones, the 7 Pro’s main camera has a quad bayer filter for pixel binning. This means that four sensor pixels (photosites) on the sensor are used to create one pixel in the final image – this means that although it has a 48-megapixel sensor, the OnePlus 7 Pro shoots 12-megapixel images as standard.

However, if you want the sensor's resolution, it will also take 48-megapixel JPEG and 12-megapixel raw shots using the Pro mode.

OnePlus has also improved the NightScape mode it introduced in 2018. It combines multiple exposures for high-quality handheld low-light images. Both the primary camera and 3x zoom also use optical image stabilisation.

The solid camera hardware in the OnePlus 7 Pro should appeal to those after a high-end phone camera that does not cost £900. But the front camera is arguably more eye-catching.

A 16-megapixel IMX471 sensor with f/2.0 lens sit in a little motorised block of metal that pops in and out of the phone’s top on command. This removes the need for a punch hole or notch in the OnePlus 7 Pro’s 6.67-inch OLED display.

Other notable features include the OnePlus 7 Pro’s Snapdragon 855 CPU, an in-screen optical finger scanner and curved Gorilla Glass plates on its front and rear.

The more conventional OnePlus 7 loses a few of the Pro version’s bold extras. It has a smaller 6.41-inch screen with a teardrop notch rather than a retractable selfie camera, a Full HD-grade panel and a dual rear camera.

It retains the Sony IMX586 sensor of the Pro, but has a slightly narrower f/1.7 lens aperture. And the second camera is 5-megapixel depth assist camera to help recreate shallow depth of field images, rather than an ultra-wide or “zoom” photo shooter.

Alongside its two new camera phones, OnePlus also announced its £99 Bullets Wireless 2 earphones, which is handy as neither phone has a 3.5mm headphone jack.

• The best camera phone you can get today: ultimate smartphone cameras on test
• The best add-on lenses for iPhone and Android phones