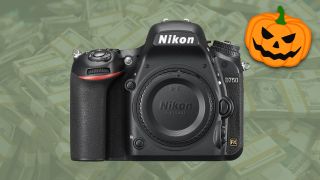 It appears that Halloween has put on its best trick-or-treating costume and is pretending to be Black Friday, as there are some great Black Friday camera deals appearing today.

One of the best is this early Adorama Black Friday deal, which sees the price of the Nikon D750 hacked like a victim in a slasher movie by a massive $500!

The Nikon D750 is a few years old now, but this full-frame DSLR still packs a hefty punch with its 24.3MP sensor, 6.5 frames per second burst shooting and 1080p video. With 29% off the price tag, it's a great offer!