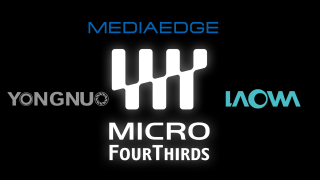 "Olympus Corporation and Panasonic Corporation jointly announced the Micro Four Thirds System standard in 2008 and have since been working together to promote the standard. We are pleased to announce that three more companies have recently declared their support for the Micro Four Thirds System standard and will be introducing products compliant with the standard," announced the group in an official statement.

"The following companies are joining the Micro Four Thirds System standard group: Yongnuo which develops, produces and sells digital camera switching lenses, performance lighting, video lighting, etc., Mediaedge Corporation, which has been an advocate of video streaming and display system concepts for over 17 years, aiming to produce products that inspire customers, and Venus Optics, the company behind the development and production of Laowa brand, which produces incredibly practical, cost-effective, and unique products. The possibilities unique to a joint standard are sure to push the enjoyment of imaging ever further."

So what does this mean, in practical terms? Well, not necessarily a great deal; after all, companies such as Kodak and Fujifilm have declared support in the past. However, recent declarations have carried much more weight, with Sharp joining the standard last year ahead of announcing the Sharp 8K Video Camera.

The real not-so-subtle takeaway from this news, though, is that Olympus – which originated the announcement – is still committed to Micro Four Thirds and won't be jumping to full-frame any time soon.