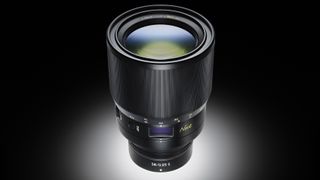 Few lenses capture as much attention as Nikon's latest future classic, the Nikkor Z 58mm f/0.95 S Noct. Following a history of ultra-exclusive lenses, it continues a bloodline that includes a number of exotic optical oddities.

On this basis, the $8,000 Nikkor Z 58mm S Noct is dangerously close to being 'affordable'. And for those with sufficient means, the Noct's rarity and desirability will likely make it an appreciating investment asset. However, money, rarity and heritage aside, is the Noct actually any good from a purely optical perspective?

Let's start with sharpness. Taking a casual glance at our lab test scores, you could be forgiven for being slightly disappointed. We only had a Nikon Z 6 body with which to test the lens, and its 24.5MP sensor is never going to push the optical performance of a lens like the 45.7MP Nikon Z 7 can. However, when you compare peak center-frame sharpness to another Nikkor Z-mount lens that we've also tested on a Z 6 - the Nikkor Z 24mm f/1.8 S – the latter actually comes out on top at its sharpness sweet spot of f/2.8-f/4. (and don't worry, we ran the Noct though several test runs to ensure top manual focus accuracy).

But this doesn't tell the whole story. What makes the Noct so special is that Nikon engineers have managed to make the Noct sharp right across the image frame, and also throughout the aperture range, including at f/0.95. That last bit is a very rare feat of optical engineering, as the majority of super-fast large aperture lenses are far from sharp when shooting wide open, often requiring to you to stop down one or even two stops to reach acceptable center sharpness. And even then, corner sharpness can still be lackluster.

Another factor that can negate the benefit of having a large max aperture is the extent of chromatic aberration (visible as purple fringing outlining high contrast boundaries) present when shooting wide open. But again, the Noct passes our fringing test with flying colours.

From wide open right through to its smallest aperture of f/16, the lens never produces more than a negligible amount of fringing, even at the corners of frame where it's usually most prevalent. We test for fringing with in-camera aberration correction disabled, so there's no camera trickery to flatter the lens. Again, astrophotographers will relish this optical quality, as images of the night sky can be about as high-contrast as photography gets.

Our final lab test assesses the degree of distortion produced by the lens. And what do you know, the Noct's distortion figure (0.05) is as close to zero as we can practically achieve within our testing margin for error (as with our fringing test, in-camera lens corrections are disabled so we can assess true optical performance).

This is undoubtedly another impressive result, though it's worth noting that, for a full-frame lens, a 58mm focal length lies at a sweet spot between where the barrel distortion so often associated with wide-angle lenses transitions to the pincushion distortion that can affect telephoto lenses. Consequently, we wouldn't expect any 58mm lens to produce significant distortion.

Sure, the practicality of shooting at f/0.95 with the wafer-thin depth of field available is another matter, especially when you only have manual focus and a keen eye to rely on. But, assuming you have the skill/luck to nail the perfect focus, along with a very steady hand, the Noct is capable of stunning all-round image quality at any aperture.