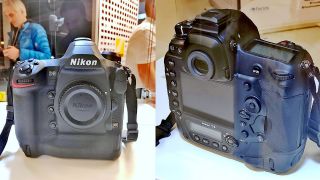 While we've seen plenty of news from other camera manufacturers this year, Nikon has been mysteriously quiet since their official announcement of the existence of the Nikon D6 (with literally no other information other than that). Since then, the only other details we've been able to glean have been from camera rumor sites, who have been diligently reporting potential leaks.

However, thanks to Nikon registering a new camera with the Taiwan NCC agency, we might finally have more official information. While the camera model is merely titled 'N1823', it's likely to be the Nikon D6. This is because the battery is the 'Nikon EN-EL18c', which has previously been used for the Nikon D4, D4s and D5 cameras.

As reported by Nikon Rumors, while there aren't many new details ripe for the picking, there are a few interesting tidbits of information to examine. The first is that the Nikon D6 obviously won't be receiving a new battery. However, with the Nikon D5 rated at 3,780 shots, it's not as if Nikon users were desperate for significant improvements in that area.

One of the more interesting pieces of information is that it looks as if the Nikon D6 will have built-in GPS. Until now, the only Nikon cameras to have this feature have been the COOLPIX models. Other Nikon cameras have been able to use optional accessory GPS devices, but the D6 will definitely be a GPS pioneer for Nikon. Other details confirmed are that the Nikon D6 will have Wi-Fi and Bluetooth.

However, while there isn't any more information from this camera registration, there are a few more rumors that Nikon Rumors has collected. Apparently, the Nikon D6 might have a 20MP sensor, not the 24MP sensor that was previously reported. It's also rumored that while the D6 won't have in-body image stabilization, it will be capable of 14 fps in normal shutter mode (compared to the Nikon D5's 12 fps).

The official announcement of the Nikon D6 is expected to be in mid-February, so we don't have long to wait until we can examine the official specs. In the mean time, if we hear any more exciting rumors, we'll let you know straight away.