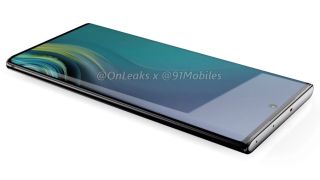 The 10 August announcement date has been suggested by South Korean outlet ETnews, and certainly tallies with the rumor mill's accepted wisdom (since June is traditionally Galaxy Note month, and the Note 9 was announced on 09 June last year).

The Samsung Galaxy Note 10 will feature a 6.28-inch Infinity-O curved AMOLED display, while the Note 10 Pro will boast a slightly larger 6.75-inch display – though the punch hole will be positioned in the center, rather than in the upper-right corner as per the Samsung Galaxy S10.

Both the "general" and professional models will be available in either LTE (Long Term Evolution, a 4G standard) or 5G iterations, and the outlet also notes that the headphone jack will be omitted on all variants.

This is in line with reports from Chinese site Gizmochina, citing recent renders phone renders (above) that line up with another persistent rumor: the Samsung Galaxy Note 10 will no longer have a dedicated Bixby button (though it still possesses power and volume buttons, on the left-hand side).

The site posits that the Note 10 will feature a three-camera array while the Pro will possess four cameras, and both will be powered by Snapdragon 855 and Exynos 9825 chipset variants "depending on the region", with up to 12GB of RAM and 512GB storage.

Contrary to earlier rumors that the Pro would brag 45W fast charging, it now seems that both camera phones will top out at 25W for their 4,500mAh batteries – still a significant improvement over the Note 9's 15W.

The pair will also feature in-display fingerprint scanners, as opposed to having a dedicated sensor on the back of the phone.

Aside from the claim that the 10 will have three cameras compared to the Pro's four, we don't yet have specs on how many megapixels or what photographic features they will possess. With only a month to go until the Samsung Galaxy Note 10 family arrives, though, we should be finding out very soon.