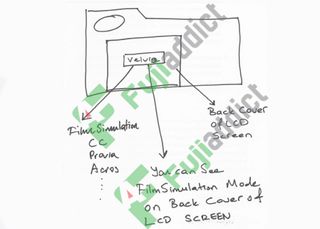 In another tantalizing piece of Fujifilm X-Pro3 news, Fuji Addict recently reported an intriguing rumor that would see the X-Pro series finally receive the flip screen treatment. However, this wouldn't be just any ordinary flip screen. Apparently, the X-Pro3 will house its LCD screen on the inside of a flip-down screen.

While the Fujifilm X-Pro2 does have an LCD screen, it's permanently housed inside the body and unable to be moved. Some have speculated that this is due to Fujifilm's desire to keep the X-Pro line targeted at camera traditionalists who aren't particularly bothered by more modern features such as flip screens.

However, it seems as if Fujifilm have hit upon an interesting compromise to please both the traditionalist who loves a clean and simple camera design and the consumer who enjoys the ease of a flip screen. From the rough sketches provided by Fuji Addict's source, it appears that when you flip out the screen mechanism, the LCD screen itself will be on the inside.

Fuji Addict's source says, "As you can see, [the] X-Pro3 [will have] a one way tilt screen… When you hold the camera you can see a cover… [and] you can also see film simulations [in] the middle of [the] cover.

"[The] X-Pro3 [will only have a] one-way tilting screen moving from top to bottom… After you open the cover, [you'll be able to] see [the] LCD screen. No moving from right to left or from left to right (very strange)."

This sounds as if the rear screen (rumored to be a kind of E-Ink display) will function similarly to the top screen often seen on larger cameras, displaying shooting information that's easy for photographers to quickly reference as they work.

Apparently, Fuji Addict's source was using a sample camera, so this might not be the final design. However, we're interested to see whether Fujifilm takes the X-Pro3 in this direction. While we like the idea of having the LCD screen hidden away (not only would it look stylish, it would also protect the screen from unfortunate scratches), we do have our doubts about how versatile this design would prove to be.

What we'd prefer instead is a fully articulated screen, such as the Panasonic GH5's, where you can choose to either hide it away or display it proudly. However, we do think that the idea of a second display on the back of the LCD screen showing shooting information sounds very interesting indeed.

No matter what the Fujifilm X-Pro3 looks like (or what color it is), we're excited to see what Fujifilm have in store for us. We'll keep you updated with any further details.