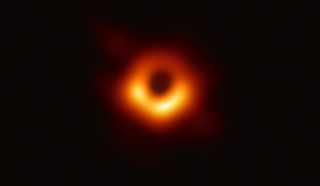 In April of this year, a group of 347 astronomers revealed one of the most exciting scientific breakthroughs of the year. They had managed to capture the first ever image of a black hole using a planet-scale array of eight ground-based telescopes.

Now, these scientists are being rewarded for their years of collaboration with the Breakthrough Prize in Fundamental Physics, a $3,000,000 prize that's often nicknamed the "Oscar of science".

Previously, astronomers could detect the light that is swallowed up by black holes, but they didn't have the sharpness in their images to see what shape the light had. However, to overcome this issue, the team linked several radio telescopes together. This simulated a giant planet-sized telescope that was capable of observing objects that appear microscopic in the night sky at unprecedented resolution. (Via Phys)

However, this group of astronomers isn't content with just a still image. Their next mission is to capture video showing how massive clouds of gas are sucked into the void. According to Phys, the Event Horizon Telescope Collaboration has already recorded the necessary observations and is processing the huge amount of data to produce the first video, which they estimate will be ready as early as 2020.

While we're not exactly expecting 4K-definition from this first attempt, Shep Doeleman, the project's director, told AFP in an interview, "What I predict is that by the end of the next decade we will be making high quality real-time movies of black holes that reveal not just how they look, but how they act on the cosmic stage."

With the black hole photo going viral world-wide, we can only imagine the excitement a video would induce. While we wait for this revolutionary footage, we'll be wondering what size sensor you'd need for an actual planet-sized telescope…