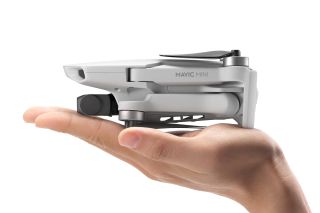 The big news in the drone world this week may well have been the launch of the DJI Mavic Air 2. But with much less of a fanfare, DJI also released something that may well be just as spectacular... and that's a completely updated version of its best-selling Mavic Mini drone.

The $399 sub-250g drone was released just in time for Christmas last year – but thanks to a free firmware upgrade this week, the DJI Mavic Mini now gets a number of significant new features, that make this UAV even better value than before.

Most significantly, for serious stills photographers and videographers, the firmware upgrade gives you manual exposure and manual white balance control. As any drone operator (or landscape photographer) will know bright skies, and sunsets, are not dealt with well by automatic systems – so this feature addition is a real game-changer for Mavic Mini pilots.

Another cool feature that the new firmware provides is a 24fps option when shooting 2.7K video. This framerate gives a more cinematic look to video footage than the standard 30fps rate. You also now get both 24fps and 48fps options when shooting at Full HD 1080p resolution.

We are also told that the firmware will also improve the download speed for both photos and videos, and will improve flight stability "in some scenarios".

The best drones for beginners

The best drones for kids