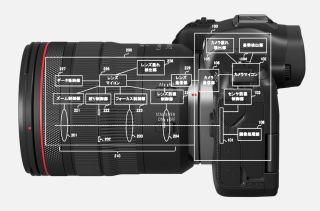 It's no secret that Canon is working on an in-body image stabilization (IBIS) system for an upcoming iteration of the EOS R. The only question was what form that stabilization would take – and now, thanks to a freshly uncovered patent, we know that the company is developing a dual IBIS and lens IS system.

As it stands, the Canon EOS R and Canon EOS RP both lack any kind of IBIS, though a number of RF mount optics do possess lens-based stabilization.

According to the new patent, discovered by Canon News, the company intends to couple its in-lens IS with new in-body IS to create a tandem stabilization system.

This is the model favored by the pioneers of mirrorless stabilization, Olympus and Panasonic, in their high end bodies. Olympus' Sync-IS, for example, amplifies the 6.5 stops of IBIS in the Olympus OM-D E-M1X to a whopping 7.5 stops when using a compatible lens.

As described in the patent (2019-087937), the image sensor is movable in order to counteract movement and provide stability.

Likewise, the patent describes optical stabilization in the lens itself:

The art, therefore, becomes communication between the lens and body so that the camera knows how much it can shift the sensor – a computation to which the new RF mount, with its increased electrical contacts, should be perfectly suited.

Canon EOS R review
Canon RF lens roadmap: everything we know so far
Camera rumors 2019 – what are the new cameras coming out this year?