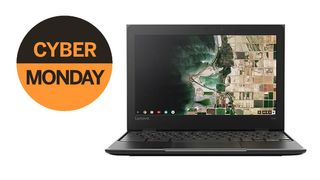 Staples is currently offering a Lenovo 100e Chromebook for under $100, making it ones of the best Cyber Monday bargains we've seen so far.

Its MediaTek CPU and 4GB of RAM mean you won't be running Photoshop on it. But if you just want a handy laptop to surf the web, write documents and use email, then it's a steal at this price. It comes with an 11.6-inch display with 1368 x 768 resolution and a 10-hour battery life, which isn't at all bad for the price.

Since it comes complete with access to Google Classroom, G Suite for Education and other education-focused apps, it's a good option for younger users. And with a massive 54% off the RRP, it won't break the bank.

Lenovo 100e Chromebook: $99.99 at Staples (Save $120)
Perfect for students and for running basic tasks like emailing and web browsing, this portable device is a great choice for anyone after a cheap and cheerful laptop.View Deal

Microsoft Surface Pro 7: was $959, now $599
Save $360: This looks a superb Black Friday Best Buy deal on the latest Surface Pro. This offers a 12.3in touch screen with an Intel Cor i5 processor, 8GB of memory, and 128GB SSD. In a platinum finish, this deal comes with the black type cover.
US dealView Deal