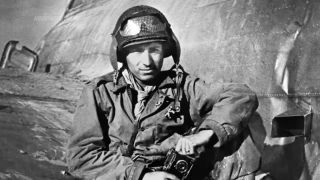 The current COVID 19 crisis has brought us so much bad news, both on a human level and to the photographic community. So we're overjoyed, on so many levels, to this incredible story about Tony Vaccaro.

The legendary World War II photographer, who fought in the Battle of Normandy as part of the 83rd Infantry Division, has beaten the novel coronavirus at the proud age of 97 years.

While the virus is particularly lethal to the elderly population, it was no match for someone who fought the Nazis and even liberated the French town of Saint-Briac-sur-Mer – the site of his iconic photograph, Kiss of Liberation. The town's main square was later named after him.

"I really feel I have luck on my back, and I could go anywhere on this Earth and just survive it," Vaccaro said in a video published by the Associated Press.

Overcoming challenge is in Vaccaro's blood. Charging into battles such as the Normandy Landings armed with an M-1 rifle and an Argus C-3 camera, resting his refile in the crook of his arm to fire off a frame before moving on, he faced great difficulties in both capturing and developing his photographs.

Not only did he have to contend with the shortage of 35mm film, there was also the issue of the lack of darkrooms. No problem for Vaccaro, though, who would borrow a squadmate's helmet to fill with developer, while he poured the fixing chemical into his own helmet (thanks, Military History Matters).

After his distinguished military service he returned to the US and found work as a celebrity and fashion photographer, shooting for numerous high-profile publications and landing a job at Life magazine. His subjects include some of history's most important figures, including John F Kennedy, Pablo Picasso and Enzo Ferrari.

"For me, the greatest thing you can do is challenge the world," concluded Vaccaro in the video. "I challenge."

The best film cameras: recapture the magic of film photography
Best film: our picks of the best 35mm film, roll film, and sheet film for your camera
The best film scanners: give your cherished negatives and slides new life