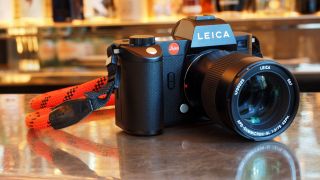 The Leica SL2 is now capable of shooting massive 187-megapixel images, thanks to the latest firmware update containing Multishot functionality.

This enables the Leica SL2 to make use of pixel-shift technology, which is made possible by the camera's in-body image stabilization system. When you take a photograph in Multishot, instead of the IBIS keeping the image sensor firmly in place, the stabilization actually turns on its head and intentionally moves the sensor eight times, shifting it by half a pixel each time.

The end result is that the camera's base 47MP resolution is quadrupled to 187MP, which is saved as a DNG file (with a standard 47MP JPG image also being recorded).

Of course, this is the same High Resolution shot mode that is featured in the Panasonic S1R – a camera with which the Leica SL2 has a great deal in common, with the two bodies sharing a very similar suite of internal features as well as technology.

Still, this means that the Leica SL2 can now take its rightful place on our list of highest resolution cameras, as it is now capable of shooting even more detailed images than the mighty Fujifilm GFX 100 medium format camera! (Though it should be noted that Fujifilm is bringing out its own firmware to add pixel-shift, which will turn the GFX 100 into a 400MP monster.)

There are a few provisos when shooting 187MP images:

• Only full-frame lenses are suitable for use with the multishot function.
• Any aperture between 1 and 16 can be selected.
• As ISO settings, values from 50 to 3200 are possible.
• The use of a flash is not possible.
• The electronic shutter is always used.
• The multishot function automatically turns off the image stabilization (BIS and OIS).
• The shutter speeds range from 1/40,000 to 1sec.

From experience with pixel-shift tech in other bodies, both your camera and your subject need to be absolutely still; even landscapes will reveal motion artifacts in leaves or water, as they move imperceptibly between the eight frames captured by the camera (only Olympus has thus far solved this problem, with the Olympus OM-D E-M1 Mark III smoothing out these artifacts).