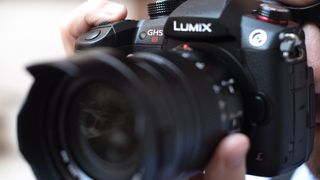 The Lumix GH5s is Panasonic’s flagship Micro Four Thirds camera for videographers. It sits above its more evenly stills/video-balanced sibling the GH5, with an even stronger focus on advanced filmmaking features.

While it looks almost identical to the GH5, at the GH5S’s core is a new 10.28MP Micro Four Thirds sensor that boasts Dual Native ISO technology, and a new Venus Engine processor. The increased physical size of pixels enabled by a lower resolution, together with the Dual Native ISO option, mean that this sensor’s output is notably cleaner at higher ISO levels than the GH5’s, making it a far better option for video use in testing lighting conditions (but at the expense of its appeal to stills shooters looking to make large prints).

While the Panasonic Lumix GH5 was the first mirrorless camera to offer 4K 60p recording, the GH5S goes a step further by offering DCI 4K (4096x2160) at 60fps in 4:2:0 8bit, and at 30fps in 4:2:2 10bit, all with limitless record times. The presence of this 10bit codec means that users can expect more faithful colors and a vastly improved range of tones in their files, which, alongside Panasonic’s preinstalled V-LogL profile, enable versatile grading during post-processing.

240fps Full HD recording is also available, meaning up to 10x slow motion capture is possible with the camera for blink-and-miss-it moments, while the broad margins of the device’s effective pixels allow multiple aspect ratios (4:3, 17:9, 16:9 and 3:2) to be used without any effect to focal length. For independent videographers working professionally, this range of capabilities will be very tempting indeed.

One of the biggest differences between the GH5S and the GH5 – and one of its most polarizing – is that the GH5S doesn't offer sensor-based image stabilization. This change will frustrate those who appreciate the ability to record shake-free handheld footage without the need for additional stabilization, but will be welcomed by pro users with dedicated stabilization rigs that provide better performance, who’ll appreciate the reduced interference from an internal system.

The GH5S has the same high-quality weatherproof construction as the GH5, together the same 1.62m-dot 3.2in free-angle touchscreen and the same external microphone and headphone inputs, but its 3.68m-dot EVF now provides a variable 120fps/60fps display speed, and its flash-sync terminal now takes on a second timecode in/out function when connected to an external device with the supplied BNC conversion cable.

Read more: 9 things you need to know about the Panasonic GH5S

Overall, the Lumix GH5S offers a video-focused feature set that isn't matched by any other mirrorless camera, which makes it a competitively priced device for independent filmmakers who value portability. This fine-tuning comes at the expense of versatility though, meaning that those Panasonic users who value stills/video flexibility should continue to look at the Lumix GH5, while the Lumix G9 will still remain the go-to model for dedicated stills shooters.