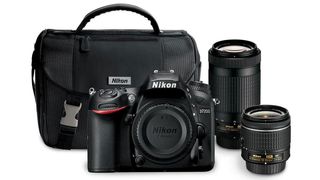 On paper it might look as if the newer Nikon D7500 has replaced the older D7200, but the D7200 is in fact alive and kicking. It doesn't have the D7500's continuous shooting speed and high-ISO capability, but it does have 4 million more megapixels and it still delivers excellent results, even by the latest standards.

Where the D7500 is designed for adventure and action, the D7200 is a different kind of camera aimed at a more general audience – it also costs a whole lot less!

The Adorama twin-lens bundle includes an 18-55mm VR lens and a 75-300mm non-VR telephoto. It's good to get a telephoto zoom included at such a low all-in price, but the lack of an image stabiliser is a concern.

If that bothers you too, take a look at the D7200/18-140mm lens bundle. This long-zoom standard lens does have VR and delivers a really wide zoom range – it's practically a superzoom.

Adorama also has the D7200 body-only at $796.95, which is pretty good considering how Nikon bodies tend to hold their value.