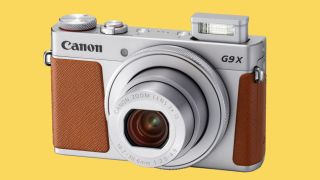 This swish-looking, metal-bodied compact is one of the most obviously retro-looking Canons we’ve seen to date, particularly in its silver iteration with tan grip (above). It can also now been found at some very attractive prices, as it has recently been replaced by the similar Canon PowerShot G7 X Mark III

The deal here is that this is a pocket-friendly powerhouse that provides another alternative to the smartphone as an image-generating device. The camera’s key features include a larger-than-average 1in 20.1MP sensor, an aluminium construction that’s claimed to be 25% slimmer than the previous iteration, plus continuous shooting speeds of up to 8.2fps (thanks, in part, to a DIGIC 7 processor).

It also features a fairly modest 3x optical zoom the equivalent of 28mm at its widest point, although the f/2 maximum aperture at the wide end allows for creative shallow depth of field effects. Videographers, meanwhile, can call upon Full HD recording, in contrast to the 4K option that found creeping into rivals such as the Panasonic LX15/LX10 and Sony RX100 III.

What’s unsurprisingly omitted, however, is an electronic viewfinder, and there's no hotshoe for you to add one as an optional extra. We do, however, get a pop-up flash, plus a raised shooting mode dial on the top plate that provides quick and direct access to exposure modes.

There's no built-in viewfinder, so stills and video are composed with the camera's 3in LCD, which is also a touchscreen. This has enabled physical back plate controls to be pared down to just four buttons aligned in a neat row, which include the familiar red video-record button at their top.

We found the touchscreen operation required a short period of familiarity as the  camera's diminutive proportions meant a tap would occasionally select a feature adjacent to the one we actually wanted. Manual focus selection is also carried out by tapping the rear display, which provides access to pretty much all of the frame apart from its extremities, while face detection, tracking and macro modes are also provided.

Picture wise, for the most part the Canon’s metering is spot on, while white balance copes well with mixed lighting conditions. As we’ve come to expect from the same sensor as that in the original PowerShot G9 X, images from the Mark II version display excellent levels of detail while colours are vibrant and pleasingly saturated.

To conclude, this second iteration would work well as a backup compact for an existing Canon mirrorless or DSLR owner, or for those wanting a bit more of the classic camera experience than their phone camera allows. Not only that, but at 206g in weight, this option will still readily slip into a jacket or trouser pocket.

With a large sensor inside a svelte shell, the G9 X Mark II exceeds expectations