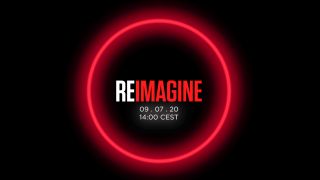 Canon has been teasing a major launch set for today, 9 July, which it is calling "its biggest product launch yet". Moreover, this launch will be livestreamed and made available directly to the public – a first for the company, which has traditionally held invitation-only press events when revealing its new products.

'Reimagine' was the company's original messaging for the launch of the EOS R system back in September 2018, as Canon promised that its full-frame mirrorless cameras would "reimagine optical excellence".

Canon is clearly giving a big clue as to what we're likely to see next week. We've already seen the announcement of the Canon EOS R5, which is arguably the company's most exciting camera (at least in terms of buzz and hype) of at least the past decade, so Canon seems to be inviting consumers to read between the lines in anticipation of more products relating to the EOS R system.

It's no secret that the industry has been ablaze with rumors over the past few weeks and months, with unconfirmed reports of the Canon EOS R6 and lenses such as the Canon RF 800mm f/11.

Canon has confirmed that a number of its high-profile ambassadors will be in attendance at the event at the launch, and at Q&A that follow.

How to watch the Canon event

You can also sign up to watch the live stream via the Reimagine microsite on the Canon USA site as well as on Canon UK. Canon Germany also has a dedicated page for the live stream, while most other regional Canon sites (like Japan and Australia) have a countdown clock ticking down the seconds to the virtual event.

In North America, top pros who will be speaking at the launch include Lindsay Adler, Sal Sincotta, Peter McKinnon,  Joel Grimes, Vanessa Joy, and Rick Sammon.

How to join the Q&A sessions

Creators that are lined up for the American Q&A session are skateboard photographer Atiba Jefferson, YouTuber and portrait photographer Irene Rudnyk, and founders of the Sociality community Scott Bakken & Jonathan Zoeteman.

We will, of course, be bringing you all the news and announcements as they happen.