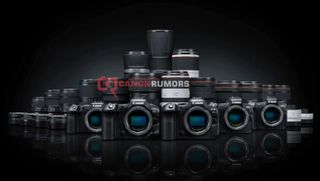 UPDATE: Check out our hands-on Canon EOS R6 review for our first impressions of the remarkable new 8K, 45MP body. We've also got a Canon EOS R5 vs R6 head to head, which compares the specs between the R5 and the new Canon EOS R5.

ORIGINAL STORY 19 JUN 2020: If you need more evidence that the July announcement for the Canon EOS R5 and R6 is more than just a rumor, you need only look at the amount of leaks that are starting to seep through.

Case in point, the above image of the latest EOS R family portrait, which not only gives another glimpse at the Canon EOS R5 but also provides our very first look at the Canon EOS R6 body – along with many of the newly leaked RF lenses, including the intriguing Canon RF 800mm f/11.

The reason for this new family portrait? Well, according to Canon Rumors (which posted the info alongside this image) all of the leaked lenses will be part of one massive announcement with the R5 and R6 at the beginning of July. It had previously been posited that this would take place on either 02 or 06 July (either side of the Independence Day weekend), but it is now reported that it will be on 09 July.

That means Canon is preparing to fire a full salvo of R system products that comprises the following:

Here's that family portrait again, which you can click in the top-right corner to open a larger view. As you can see if you snoop really closely, the Canon RF 600mm f/11 and Canon RF 800mm f/11 both have a new aesthetic for Canon lenses.

Both optics bear a black chassis and silver band around the upper third – a notable change from the unusual green ring that is usually worn by Canon's DO (diffractive optics) lenses. (Find out more about Canon's DO lenses.)

With only a couple of weeks to go until the purported announcement, we can't wait to see more details that invariably leak before then…