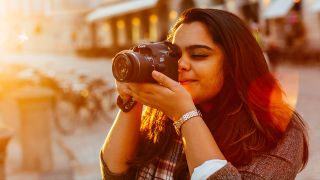 The best camera for beginners will depend on what you're looking for! Do you want to build your skills and become a better photographer, or do you want to get out there and take pictures without having to learn a lot of technological jargon?

If you just want to take pain free pictures, take a look at our guides to the best point and shoot cameras, the best camera phones for photography and the best cameras for kids (of all ages!). The best action cams are really easy to use, too.

If you want to learn about photography, though, these are the five things to look for in the best cameras for beginners:

When you buy your first DSLR or mirrorless camera, you're buying into a camera system. A camera isn't just the body, it's a whole ecosystem of lenses and accessories that are specific to that body (or, at least, that manufacturer). So it pays to do your homework and invest in lenses that you can keep using, even as and when you outgrow the original body.

Our list includes both DSLR and mirrorless cameras. The best mirrorless cameras have the advantage in terms of portability and weight, but if size isn’t a priority then the best DSLRs do give you more bang for your buck.

heck out our breakdown of DSLR vs mirrorless cameras for everything you need to know about the differences between the two.

One more thing: many of these cameras are sold for slightly less in 'body-only' form, but we always recommend getting a 'kit lens' at the same time. It's a lot cheaper than buying them separately, and if there's a specific kit lens we recommend, we will say so below.

The best cameras for beginners in 2020

It's not the cheapest, but this is the best beginner DSLR around

This isn't the cheapest DSLR you can buy by any means, but very often it's worth paying a little extra money to get a much better range of features – and this is the perfect example. The EOS Rebel SL3 (aka EOS 250D / EOS 200D Mark II) has Canon’s top-of-the range APS-C sensor with 24.1MP of resolution and brilliant Live View shooting, thanks to a fully-articulating touchscreen display and Canon's fast Dual Pixel CMOS AF autofocus. In fact, we’d actually say this is one of the only DSLRs where composing shots with the screen is downright preferable to using the viewfinder. Canon also packs in 4K video and Wi-Fi and NFC connectivity, wrapped up in the smallest DSLR body you'll ever see.

If you’re worried about DSLRs being complicated, don’t be. The Nikon D3500 has a brilliant ‘Guide’ shooting mode that acts as a fully interactive guide to photography and camera settings, delivered via the rear LCD screen. The D3500's controls are  straightforward and easy to get to grips with. Its price means it does strip back on some more advanced features. For example, there’s no Custom Settings menu for tailoring camera functions to your preferences, as featured on every other series of Nikon DSLRs. The autofocus in Live View and movie capture modes is also sluggish, though the Nikon AF-P DX 18-55mm f/3.5-5.6G VR lens lens speeds it up and is the best kit lens to go for. Overall, the Nikon D3500's image quality and performance are extremely good for the price, and the 5fps burst rate is pretty sporty for an entry-level DSLR. Take a look at the many other great Nikon lenses that this DSLR system allows you to use.

The X-T200 is great for photo novices and instagramers

The Fujifilm X-T200 is light and compact, but looks and feels handles like an old-school 35mm SLR camera. Best of all, the X-T200 has a big new 3.5-inch vari-angle touchscreen with twice the resolution of most rivals and a 1:6 aspect ratio perfectly suited to video. It also has an electronic viewfinder and can shoot 4K video as well as 24-megapixel stills. Its 15-45mm kit lens is electrically powered and is a bit of an acquired taste, but it's really compact for an APS-C kit lens and it also offers a much wider angle of view than most kit lenses, making it ideal for interior shots and big landmarks.

It's small and portable, powerful and chic, even if it is only 16MP

Available in black or silver, this mirrorless camera has a classic yesteryear look and feel, harking back to Olympus OM film cameras that launched in the 1970s. The E-M10 Mark III is the least expensive and most beginner-friendly model in the current OM-D range. Even so, it shoehorns some fab features into its diminutive and beautifully crafted body, including a high-resolution electronic viewfinder and high-res tilting touchscreen. The built-in 5-axis image stabilization works with any attached lens, and the 14-42mm EZ kit zoom lens is a joy to use. It’s a compact ‘pancake’ design and its power-zoom facility is great for movie capture. Speaking of which, the camera can shoot 4K UHD movies and rapid bursts of stills at up to 8.6fps.

Although it’s now almost six years old, the A6000 is still one of Sony’s best entry-level cameras. Sony is still making them, so it's not going to disappear any time soon. Moreover, it significantly undercuts the newer A6100, A6400 and A6600 models on price. With its APS-C format compact camera styling, and access to Sony’s range of interchangeable lenses, it’s a small body that packs a big punch. Resolution from the 24.3MP image sensor is very good, though the 1,440k-dot resolution of the electronic viewfinder is a little weak by today's standards, and the 921k-dot tilting screen feels quite cramped too. It lacks the ability to record 4K movies and it doesn't have the high-tech AF of Sony's latest A6000-series cameras, but if you can live without those  the solid build quality, image quality, continuous shooting and autofocus performance are better than you'd ever expect from its price.

The D5600 is a pretty expensive buy for absolute beginners, and it lacks the D3500’s interactive Guide shooting mode, but it’s still easy to use with full Auto, Scene and Effects modes, and plenty of manual exposure control too. The 39-point AF system covers the frame better than the D3500, which makes it even better for following moving subjects and for more precise control in general, but for many people the single key advantage over the D3500 will be the 3.2in vari-angle touchscreen display, which is also a little bigger than most others. The live view autofocus isn’t as accomplished as on the Canon Rebel SL3 or any of the compact system cameras here (particularly for video), but the overall performance is still excellent, and lens options are plentiful. The D5600 is a good choice if you're ready to try out more advanced techniques – we recommend getting it with Nikon's retracting AF-P 18-55mm VR kit lens.

This Panasonic is small, simple to use and inexpensive too

The diminutive GX80 can be adapted to the needs of any user, from the beginner that just wants to rely on the leave-it-to-the-camera Intelligent Auto option, to the photographer that wants complete control over all exposure settings like shutter speed and aperture. You also get 4K video and a built-in electronic viewfinder. Together with Panasonic's tiny Micro Four Thirds lenses, this makes it a great choice for travelling or holidays. Try to get it with the retracting 12-32mm 'pancake' lens – this combination is not a whole lot bigger than a compact point and shoot camera.

Read more: These are the best mirrorless cameras right now

The X-A7 will make smartphone upgraders feel right at home

We liked the old Fujifilm X-A5 for its gorgeous retro-styled compact mirrorless design, with flip-up-and-over screen for selfies and vlogging, and a very good 24.2-megapixel APS-C sensor. It's still on sale in some stores at discounted prices, but it's been replaced by the newer Fujifilm X-A7. The X-A7 has much better 4K video (proper 30fps not the old camera's silly 15fps) and a much larger 3.5-inch screen with a vari-angle pivot. This screen is really good, and the biggest on any current camera apart from Fujifilm's own X-T200. This screen alone makes the X-A7 a great upgrade for smartphone photographers, who will love the big display and won't mind the lack of a viewfinder.

Canon's cheapest mirrorless model is OK, but not our first choice

While that "Canon" name on the front means you can be sure you're getting something well-made, in truth the EOS M200 is not the most exciting mirrorless camera around. Its build is not as comfortable or ergonomic as others on this list, and its images don't have the rich colours of a Fujifilm camera. What it does have going for it, however, is price: it's Canon's most affordable current mirrorless camera, and is also nice and small, making it easily transportable and thus a good choice for travel. There's even 4K video in there, albeit with a vicious 1.6x crop and no mic input socket to improve the sound quality. It's a decent budget choice, but nothing exceptional.

A bare-bones outfit that really strips back the cost

Nobody wants to buy an expensive camera only to discover that photography’s not for them. You can limit the risk with this remarkably cheap DSLR and kit EF-S 18-55mm f/3.5-5.6 III lens, it’s well suited to beginners, with the same ‘intelligent’ full auto shooting mode and feature guide as you’ll find in pricier Canon cameras. The ‘Quick’ menu is typically intuitive, and there are plenty of scene modes as well as more advanced shooting modes. There’s also a Creative Auto mode to help you progress from ‘basic zone’ to ‘creative zone’ modes. The 18MP image sensor is a little lacking in megapixels compared with most current DSLRs, and there are more serious cutbacks in other areas. Ultimately, it’s a very basic camera but a sensible bargain-basement buy if you just want to dip your toe in the photographic water (though it's getting harder to find in some territories).