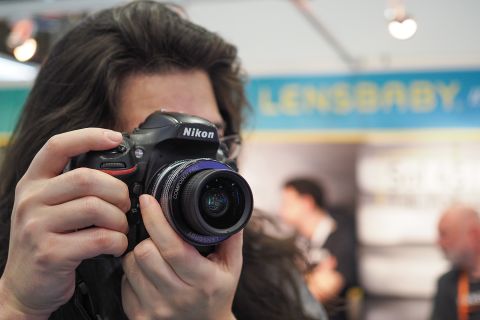 The Lensbaby Edge 35 is the 35mm version of the beloved optic that consumers have been waiting for. It lives up to expectations, delivering the unique Edge effect in a street photographer-friendly focal length. It operates identically to its siblings and creates stunning slices of focus, though obviously you need the Lensbaby Composer Pro I or II to use it.

The Lensbaby Edge 35 Optic has only just been announced, but we were the first people outside the company itself to take it for a test drive at The Photography Show, where it made its worldwide public debut.

For those unfamiliar, Lensbaby lenses are not lenses in their own right, but add-ons for the Lensbaby Composer Pro housing, available for the Canon EF, Nikon F, Fuji X, Micro Four Thirds and Sony E mounts – and the has confirmed that it's about to release a version for the Canon RF and Nikon Z mounts.

The Edge Optic It creates a slice of focus in the image, within which everything will be sharp, while everything else can be rendered increasingly or decreasingly blurry. Very first Edge Optic was released in 2012, the Edge 80, with the 50 following in 2016. Lensbaby tells us that a 35mm version was the most requested lens that it has ever made, so anticipation is high for this release.

The Edge 35 doesn't disappoint. Offering a 35mm focal length with an f/2.5 aperture, the lens is extremely sharp edge-to-edge with a flat field of focus that performs like any well-corrected lens.

It works identically to the other Edge Optics; paired with the Lensbaby Composer Pro II you get nearly 15 degrees of tilt, which is nearly twice as much as most tilt-shift lenses. If you tilt up or down you get a horizontal slice of focus running through your image, while tilting left or right creates a vertical slice. By racking your focus from near to far, you can see the plane of focus slide throughout your image.

In addition to that selective focus, you're also able to get infinite focus on a plane that's not parallel to the sensor, even at the brightest aperture. This produces otherwise impossible focal effects, and can be used – or abused – to great creative effect.

While the 50mm and 80mm versions were more apt for portraiture, the Edge 35 is a dream for street photographers who want to add a unique flourish to their images, creating subtle streaks of selective focus or carving out great swathes of blur.

The prototype we used featured some vignetting, which shouldn't be present in the production version.

Being a manual focus optic is a necessity, as this is what gives you the ability to control and direct your plane of focus, but it also poses an obstacle even for seasoned Lensbaby users. As with the Edge 50 and 80, it doesn't hurt to take a frame and then fine-focus forward and backward a little for extra shots to make sure you get a sharp image.

The resulting images aren't going to be to everybody's taste, but for the Lensbaby faithful this is the lens you've been waiting for – and from our time with it, the wait has been worth it.