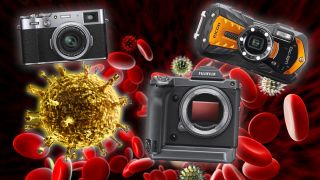 This week's camera news has been dominated by Fujifilm, which not only announced a new compact that's as lust-worthy as a Leica but also promised 400MP medium format photographs.

Ricoh also announced a new camera – one that is waterproof, dustproof, crushproof,  shockproof, freezeproof… but for some bizarre reason, doesn't shoot video in 4K.

Then there's the effect of the coronavirus currently rampaging across Asia – and the massive impact it's having on producing cameras and smartphones. And speaking of phones, there's also the coup currently taking place in the smartphone industry, with four giant companies forming like Voltron to take on Google.

So let's get straight to it – these are the five biggest camera news stories of the week!

Hidden in between the news of the new Fujifilm X100V and the first showing of the new XF 50mm f/1.0 lens, this week's X Summit also brought us another amazing announcement from Fujifilm. Blink and you might miss it, but the company announced that it was going to release a firmware update for the GFX 100 that would increase its resolution to a staggering 400 megapixels!

As you may know, the Fujifilm GFX 100 medium format camera was launched last year with a seemingly record-breaking 100 megapixel resolution. A resolution made even more amazing by its built-in image stabilization, uncropped 4K video shooting, and its price.

Now the Fujifilm boffins are working on a technology that will leverage the image stabilization mechanism, we believe, to offer "sub micrometer order control" to the sensor. The goal is reduce spacing between pixels ten fold, and to offer an effective resolution of 400MP…

Fujifilm X100V is almost as lust-worthy as a Leica

Fujifilm has unveiled its fifth generation of its iconic luxury compact. The Fujifilm X100V continues the dynasty with a raft of improved features, but the fundamental attraction of this retro-styled camera is the same – ten years since the first X100 camera was launched at Photokina 2010.

Designed for travel and street photography, the Fujifilm X100V has a fixed wide-angle lens, and a hybrid eyelevel viewfinder, that recreates the look and feel of classic rangefinders – but with all the control and mod cons of a modern digital camera. With milled aluminum top and base plates, and a manual dials, create a traditional finish to this distinguished family of cameras.

Continuing on from the Fujifilm X100F, the X100V features a newly designed higher-resolution 23mm f/2 lens, improvements to the image quality of its Advanced Hybrid Viewfinder, the option to make the camera weather resistant, a new higher-resolution 26MP backside illuminated sensor, improved ergonomics, particularly with the functionality of the ISO dial, and (perhaps most importantly of all) the addition of a tilting mechanism to the rear LCD panel…

Coronavirus could disrupt Sony's sensor business – and everyone else's, too

The sweeping coronavirus epidemic in China could have a profound impact on Sony's imaging sensor business. This would, in turn, have a knock-on effect on everyone from Apple to Nikon, as Sony supplies sensors to almost every major manufacturer of photographic products.

"We are concerned about the spread of the coronavirus," Sony’s chief financial officer, Hiroki Totoki, announced in a news conference. "Depending on the future progress of the virus, we cannot deny that our production and sales supply chain for the image sensor and electronics business could be affected enormously."

Currently, Sony predicts that the biggest impact will be on its smartphone imaging sensor business. With companies such as Apple and Huawei using Sony sensors, this could have a significant effect on camera phone production – indeed, iPhone production already faced disruption from the outbreak last week, which affected both current and upcoming Apple products…

Read more: Coronavirus could disrupt Sony's sensor business – and everyone else's, too

Ricoh has officially announced the new Ricoh WG-70, its latest weatherproof outdoor camera. However, the new name and new orange color are essentially all that's new, as the camera is almost identical to its predecessor – right down to the lack of 4K.

Four Chinese camera phone manufacturers are working together to create an app store experience that will enable developers to upload their apps simultaneously to all four of their app stores with just one click. Having recognized how devastating a turned off Google tap can be for an Android manufacturer, the four brands: Huawei, Oppo, Vivo, and Xiaomi have formed this appy alliance.

If you’ve ever used a Chinese Huawei phone, you’ll know that without the Play Store, your experience in the west will be very handicapped. No banking apps, no Spotify and definitely no Facebook, which in turn means no WhatsApp or Instagram or any other Facebook-owned services. It hasn’t been feasible for most developers to devote an estimated day of dev work to port the apps from the Play Store to Huawei’s own app gallery.

That’s why the Huawei Mate 30 Pro, which launched after Huawei was banned from using Google Mobile Services (GMS), isn’t currently available in the west despite the fact it features one of the best cameras we’ve ever used on a smartphone. This new multi-deployment system would be a huge step to help incentivize app developers to develop apps for non-GMS certified devices…

Valentine's Day gifts for photographers: Get your loved one something special
The best instant cameras in 2020 – from best instax to best Polaroid cameras
The 10 best pro video accessories in 2020