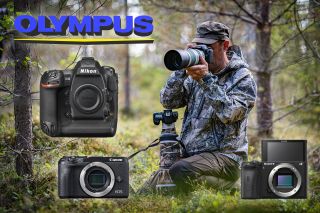 If you thought that DSLRs were dead and that the big manufacturers had forsaken their APS-C lines, boy oh boy were you wrong. The biggest camera news stories this week revolve around new camera announcements – but there's plenty more besides.

In a stealth news item of no small significance, one camera manufacturer quietly sold its minority ownership in another – which could be the first step towards a further refinement of its business portfolio.

We also have a tease of a new flagship camera, as well as full specs for an eagerly anticipated 6K camera… These are the five biggest camera news stories of the week!

Any ideas that Sony’s APS-C mirrorless camera range was on its last legs have now been firmly dismissed.

The vlogging-friendly Sony A6400 announced in January 2019 felt like it could have been a new beginning or the end of the line, but the announcement of the Sony A6100 and A6600 shows Sony is committed to this smaller format.

There’s STILL no news about any new Sony A7000 (we think we may have killed it by talking about it so much), but with two new APS-C cameras and two new lenses too, we’re not going to complain…

After a long period of development and very little technical information, Panasonic has at last announced the full specifications of its Lumix S1H 6K cinema camera.

It follows in the footsteps of the company's Micro Four Thirds GH series, which proved that digital still cameras can produce the video features and quality that professional filmmaking requires.

The Panasonic Lumix S1H takes this to the next level, with a full frame sensor, 6K video capture (yes, 6K) and compatibility with 46 L-mount lenses which are or will be available (according to Panasonic, see the L-mount lens roadmap)…

Read more: The Panasonic Lumix S1H specs are official... and it's everything we thought!

Sony no longer part-owner of Olympus

Sony is no longer a minority owner of Olympus, after selling its ¥80.4 billion yen ($762.88 million / £626.5 million) stake back to the medical and imaging giant. The sale, which transfers Sony's remaining 68.9 million shares back to Olympus, dissolves the capital alliance between the companies, which began in 2012 when Sony purchased 11.5% of its rival.

That spearheaded a joint medical venture between the companies in 2013, which saw them develop high-definition surgical endoscopes and microscopes – the core part of Olympus' business, since it is first and foremost a medical company (its imaging division often acts as an R&D resource for developing medical optics).

More than just an opportunity to work together, however, the cash injection was sorely needed by Olympus in 2012, following the infamous financial scandal that rocked the company to its core and crumbled its share price…

Nikon D6 being announced on Wednesday?

Nikon could be poised to announce its new flagship camera next week. The Nikon D6 is rumored to be revealed on 04 September – which just so happens to be the same day that the IFA consumer electronics expo kicks off in Berlin.

The Nikon D6 has been widely anticipated to arrive in time for the 2020 Tokyo Olympic Games, with an announcement predicted for October. However, if the rumor is true, we could get a glimpse of the new camera much sooner.

It seems likely that the announcement, if it does indeed take place, will be a development announcement – which is to say, Nikon will tell us that it is officially working on the camera, but shy of a couple of teasers won't reveal full specs, pricing or availability…

The best photo printing online: top services from around the web
The best GoPro cameras in 2019: fantastic action cams you can buy right now
The 10 best bridge cameras in 2019: ultra-zoom cameras for far off subjects