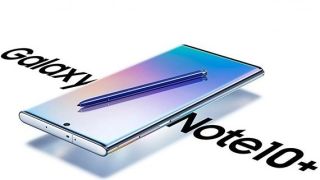 Another official photo of the upcoming Samsung Galaxy Note 10 has emerged, giving us a clearer look at the phone ahead of its impending launch on August 7.

Courtesy of prolific leaker Evan Blass, the image shows the top side of the Galaxy Note 10, showing the front-facing selfie camera a little more clearly than previous images and renders have done.

Leaks from the Federal Communications Commission (FCC), reported by Trusted Reviews, have also provided us with some more details on key specs, including the phone’s display and camera.

The Samsung Galaxy Note 10 Plus will be sporting a 6.67-inch display, and no smartphones in the range will come sporting a headphone jack, as we saw in the round of leaks that occurred about a month ago. Latest information also confirms that the dedicated Bixby button (to bring up Samsung’s virtual assistant) will also be disappearing, in news that will bother precisely nobody.

Camera-wise, it looks like the Note 10 will have a pretty impressive setup, with three lenses (wide, ultrawide and telephoto) in a vertically aligned module. Next to this are two additional lenses – a depth sensor and an unidentified fifth lens. Interesting stuff!

Pricing-wise, rumours indicate that the Samsung Galaxy Note 10 will be going for a starting price of 999 EUR, which equates to about $1,100 or just shy of £900. The announcement is set for August 7, at which point we’ll be sure to bring you all the details of these exciting new smartphones.

One thing’s for sure – with this on the horizon, and new phones in the pipeline from Apple and Huawei, it’s a really exciting time to be a smartphone photographer!

The best add-on lenses for iPhone and Android phones