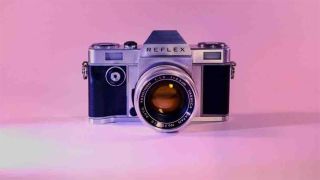 A new Kickstarter project aims to give analogue photography a 21st century makeover in the form of a newly designed 35mm SLR.

Dubbed Reflex I, the SLR has a modular design, with an interchangeable lens mount that will allow photographers to use lenses and film they already own.

The interchangeable mount, called I-Plate, allows for quick and easy swapping between lens brands. While Reflex will ship with a universal M42 mount as standard, alternatives for Nikon F, Olympus OM, Canon FD and Pentax PK will also be available.

The team behind the project has stated that it plans to refurbish some lenses to come with the camera, namely the Helios-44 58mm f/2.0 (a Russian copy of the Zeiss Biotar) and the Penntacon 50mm f/1.8, based on a Meyer-Optik Görlitz 50mm f/1.8 Oreston design.

The model is also to be designed with a changeable back (I-Back), which is designed to make the process of changing film as quick and easy as possible. It has the option for pre-loading a roll of film, which allows users to switch between film types mid-shoot.

The makers also promise Reflex I will be compatible with third-party add-ons and accessories, and users with the know-how will even be able to 3D print their own modifications for the model.

Reflex I is also the first analogue camera to carry multiple forms of light on board. Users will have the choice of built-in flash and continuous light (LED), each offering three levels of intensity for different situations.

While the team is seeking £100,000 to develop the camera, an accompanying Reflex app will be developed in the event that the company reaches a further goal of £150,000. This, the company claims, will allow users to log the settings of each film loaded and each shot taken by linking it to their smartphone, effectively providing an on-the-go analogue metadata system.

Reflex has been created and designed by the team behind photographic community If You Leave, headed up by Laurence von Thomas. The team has a working prototype of Reflex – to see shots taken with the new camera, head to the team's Instagram page.

Reflex I: Price and availability

Reflex will only come to market if the project achieves £100,000 in Kickstarter funding by December 7th 2017. It looks like it’s already well on its way, so if you want to get in there while there are still rewards to be had, head to the Kickstarter page.

You’ll need to pledge at least the £350 early-bird price to get hold of a camera, with the standard price being £399.