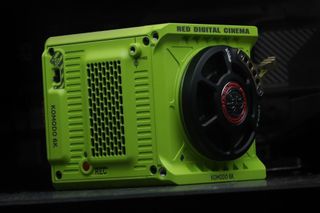 Ah, the Red Komodo camera. It's as mysterious as it is tantalizing, and Red President Jarred Land is doing everything he can to keep us all on tenterhooks. With several intermittent teasers posted on his Instagram showing select features of the Red Komodo's body, Red fans have been at their wits' end waiting for a release date.

However, the latest move from Land might mean some more substantial information might be just around the corner. Jarred Land recently posted a picture of a lime green Red Komodo 6K camera with a simple caption of "Boom Boom Boom. #bayhem".

While this caption might initially seem a little obscure, it's actually a reference to a previous camera that Red created for director Michael Bay.

In 2016, when Michael Bay was busy directing the latest in a long list of Transformers sequels, Red created a one-of-a-kind signature camera for it. Billed as the 'lightest, most advanced handheld motion picture camera in the world', Michael Bay used it to film 'Transformers 5: The Last Knight".

However, Bay first put the lime green camera through its paces by using it on a Victoria's Secret shoot, making a totally-not-weird comment of, 'and here we are selling panties with it.' (Ah, 2016 really was a simpler time.)

Now, a mere three years later, it appears as if Red have created the Bayhem 2.0 with a similarly colored Red Komodo camera. This certainly seems like a clever way to market the Red Komodo, and we're hopeful that this means a specs list, release date and price may be lingering on the horizon.

However, if you're a fan of this eye-catching color, you might end up being disappointed. Unfortunately, we would assume that this fetching lime green shade is probably another one-off for Michael Bay, so you'll likely have to settle for the standard Black finish (although, really, what would be the harm in doing a DIY paint job on thousands of dollars worth of Red tech??).