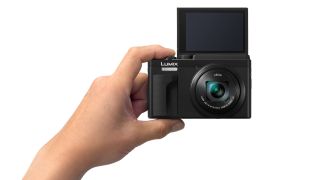 Panasonic has revealed a new point-and-shoot camera, the Panasonic Lumix DC-TZ95, known as the ZS80 in the United States.

At the Panasonic European Convention 2019 in Frankfurt, with Digital Camera World in attendance, Panasonic announced the camera which offers 30x Leica Lens, a tiltable rear monitor and Live View Finder, and a 20.3MP sensor. Like all the best travel cameras, it packs a long zoom range into a compact, pocket-sized body.

The latest compact camera was leaked just before the conference by Japanese rumour site Nokishita (hat tip to 43 Rumors).

It looks to be a minor upgrade from the existing Panasonic TZ90/ZS70, which we count among the best point-and-shoot cameras, adding a couple of millimetres to the dimensions and a few grams in weight, as well as improving the viewfinder and adding Wi-Fi and Bluetooth connectivity.

The full specs are as follows:

The TZ95/ZS80 looks like it will effectively replace the TZ90/ZS70, and will sit below the Panasonic Lumix DMC-TZ100, which boasts a slightly larger sensor and faster maximum aperture (f/2.8) at the expense of a reduced optical zoom (10x).

With the gap between camera phones and dedicated cameras rapidly closing, Panasonic could be accused of being too conservative with these specs – especially with the big guns that are sure to be revealed at MWC 2019 next week. Although new features such as Zoom Compose Assist (which helps track your subjects by quickly zooming out when they move out of frame) certainly show promise.

The Panasonic Lumix TZ95/ZS80 will be available from the end of April in black and black & silver colourways, at a price of £399/$449.

The best Panasonic cameras in 2019

The best point-and-shoot cameras in 2019: great cameras that are simple to use