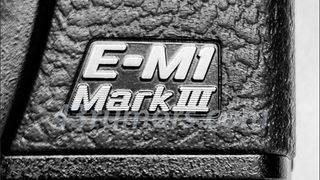 The Olympus OM-D E-M1 Mark III, the company's latest flagship camera, has been the subject of a number of leaks ahead of a purported February announcement. From the specs revealed thus far, the new camera will incorporate some of the features of the revised 2019 flagship, the E-M1X.

The manufacturer assured the camera industry last year that it was working hard on new camera bodies, with the Olympus OM-D E-M1 Mark III set to kick off a busy 2020 for the Tokyo-based company.

It was only a year ago that it released the Olympus OM-D E-M1X, a guns-blazing professional sports camera that seemed a strange move for a Micro Four Thirds body, featuring a much larger DSLR-sized frame. However, that size accommodated twin processors that enabled the camera to perform a number of exciting new features – and it seems that some of these will make their way to the E-M1 Mark III.

According to information leaked by 43 Rumors – which also leaked the first (extreme close-up) image of the camera, above – the Olympus OM-D E-M1 Mark III will feature an all-new processor, which will likely be the TruePic IX.

The E-M1X used a pair of TruePic VIII processors to perform such tricks as a handheld 50MP Hi Res Shot (using sensor-shift technology), which was not possible using a single TruePic VIII. Clumsy maths tells us, then, that TruePic IX might be as much as twice as powerful – so we're hopeful that other E-M1X features, such as Live ND and intelligent subject tracking, will also make it across.

According to 43 Rumors, the E-M1 Mark III carries over at least one physical upgrade from the E-M1X: an additional joystick. Unless this is a new piece of tech, like the Smart Controller on the Canon EOS-1D X Mark III, this seems likely to be a second joystick for vertical shooting – however, the site claims that the Mark III will not possess the built-in vertical grip of the E-M1X, so the ergonomics of this could be interesting.

So far, that's the extent of what is confirmed (albeit with a grain of salt) to be new in the camera. The site claims that it will retain the same battery, as well as the same 20.4MP image sensor as the E-M1X and E-M1 Mark II.

The latter is disappointing news, as this is the same sensor that came out in 2016. Now that we've seen Sharp take Micro Four Thirds resolution to new heights, thanks to the 33MP sensor in the Sharp 8K Video Camera, we had hoped Olympus might have a similar breakthrough.

Still, there's nothing actually wrong with the sensor – especially if the Olympus E-M1 Mark III can also achieve the 80MP Tripod Hi Res Shot that the E-M1X could – and the improved TruePic IX processor could squeeze extra performance out of it. Either way, we can't wait for February to roll around so we can find out more about Olympus' latest flagship camera.

Olympus OM-D E-M1X review
The best Olympus camera in 2020: for Instagrammers, enthusiasts and pros
Olympus in 2019: what happened, why, and where next for the MFT format?