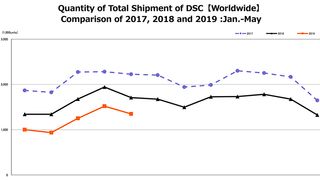 Nikkei has published its latest report on the state of the camera market – and it’s fair to say that business isn’t exactly booming.

Indeed, the trend we’ve seen for the past few years of camera sales declining has continued apace, with the overall market declining by 18% throughout the year. A few months ago we reported that the camera market has collapsed 84% since 2010, so this isn’t exactly coming as a surprise.

A breakdown by manufacturer of the individual market share changes gives a more detailed picture of what’s been going on.

So while it’s a poor trend overall, it’s somewhat good news for Canon, Fujifilm and Olympus, all of whom managed to increase their respective market shares. Canon especially has had a relatively good year – thanks in no small part to its successful capturing of the mirrorless market in Japan with its full-frame EOS R.

Nikon and Sony both lost out, each experiencing a decrease in their respective market shares. It’s worth noting too that Nikon’s 2.7% drop was more precipitous than Sony’s 0.7%, lending further credence to the industry speculation that Sony could overtake Nikon as the global #2 worldwide.

Nikkei reports that the trend is expected to continue – however, with the recent news that smartphone sales are also slumping significantly, it will be interesting to see whether this ends up having an impact on the camera market. It’s also worth noting that manufacturers themselves have no plans to give up the ghost – Fujifilm bosses are convinced that there is growth potential in the market yet, and Ricoh executives are still convinced that photographers are due to abandon mirrorless cameras and return to DSLRs (any day now, lads).

It’s not clear yet how all this will play out – but we’ll be sure to keep you up to date with all the latest.

The best camera for beginners