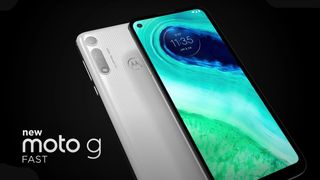 The upcoming Moto G Fast has recently been leaked… by Motorola's own US YouTube channel. A short 30 second promo video was accidentally published on the platform and then swiftly taken down. However, we all know that videos on the internet last forever. An enterprising individual was savvy enough to download the Moto G Fast promo video before it was archived.

The promo for the Moto G Fast bills the upcoming handset as having a "blazing fast performance" and two days worth of battery life. It also reveals that it will house a Qualcomm Snapdragon chipset with octa-core CPU (although it doesn't name which specific SoC it'll have) and 3GB of RAM.

The Moto G Fast will have a triple camera unit, including an ultra-wide camera with a field-of-view of 188º. The promo video also places a heavy emphasis on the macro lens. However, we don't have any specs for the main camera and what kind of sensor it'll be using. The selfie camera appears to be housed in a punch hole on the top left of the phone.

There isn't much more official information to glean from this promo video for the Moto G Fast. However, there are a few details that we can puzzle over, such as the Motorola logo on the back of the phone. Phone news website GSMArena suggests that this could a fingerprint reader for users to unlock their phones.

Unfortunately, we'll have to wait for more information to be released (officially, or unofficially) to know more about the Moto G Fast. However, as GSMArena states, if the promo video is ready, then an official launch is likely already in the works.