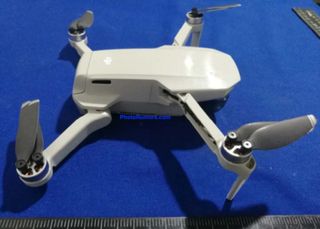 After last week's disappointing rumor that we wouldn't be seeing any new drones over 250g until next year, it looks as if DJI might be about to give camera drone enthusiasts a reason to smile. A new video has been leaked that's purporting to show the DJI Mavic Mini.

'Mini' is certainly correct, as this new drone is the same size as the hand of the person handling it. However, as suggested by the name, this is not simply a new version of the Spark; it's closest cousin looks to be the Mavic Air, but there's one key difference.

The Mavic Air weighs in at just 430g – significantly lighter than the Mavic Pro's hefty 734g but still heavy enough that, if it were being developed today, it would fall under DJI's new announcement that all its models from January 2020 over 250g will have ADS-B receivers in them. This piece of technology will enable the drones to pick up signals from nearby airplanes and helicopters, which will help drone pilots prevent dangerous situations.

This is significant because the DJI Mavic Mini is rumored to be just 245 grams – an entire 5 grams under DJI's self-imposed weight limit.

So why is this 250g weight limit so important? Well, drone rumor website Drone DJ says that Brendan Schulman (DJI Vice President for Policy and Legal Affairs) once explained during a workshop that the 250g weight limit had somehow been established in both the drone industry, and drone policymakers' minds, as the 'magic number' to prevent incidents.

"It's the threshold weight above which drones would become dangerous and possibly pose a risk to manned aircraft and people on the ground in case of drone incident or crash."

Drone DJ goes on to speculate that if the Mavic Mini can stay below the 250g weight limit then DJI would have produced the ultimate consumer drone. Not only would it not have to be registered with the FAA (which would also help explain why it's not listed on the 'EU Declaration of Conformity' web page on DJI's website, which incidentally leaked the other two rumored drones), but policymakers worldwide would be kept happy.

So when will we see this brand new, all-singing, all-dancing drone? The Mavic 2 Pro+ and Mavic 2 Zoom+ are set to appear at some point in 2020, but we believe there's a possibility that this Mavic Mini could fly into view in late 2019.

This is again due to the lack of an ADS-B receiver in the Mavic Mini. Because of this, there's no need for DJI to hold onto it until its self-imposed January 2020 date. We believe we likely won't see it until after October, however, as the new EU drone rules that come into effect in June 2020 won't be finalized until then.

Unfortunately (but realistically), we would be surprised if DJI released any new drone products before it can 100% confirm that they will be compliant with the finalized regulations.

However, with leaked photos, specs and even video appearing pretty consistently, it looks as if DJI is ready and raring to drop some incredible new products as soon as it possibly can.

Best DJI Mavic Air deals in August 2019
Best drone accessories: essentials for your DJI drone and other quadcopters
Best drones for beginners in 2019