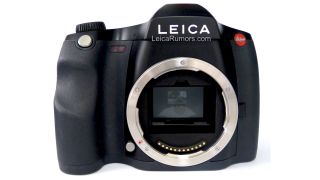 Speak of the devil, he shall appear! The Leica S3 has just risen from its Sleeping Beauty-like slumber, with fresh images and full specifications being leaked online.

After we flippantly made mention of the Leica S3 yesterday, in our story about the (similarly leaked) new Leica M10-R, a fresh batch of pictures and specs appeared online for Leica's long-awaited medium format camera.

We first got our hands on the S3 way back in September 2018, where we were not immune to the magic of this medium format DSLR that packs a 64MP sensor, uncropped 4K video and the ultimate expression of images possessing the much vaunted "Leica magic".

Since then, however, the camera has completely dropped off the map, reportedly delayed until spring of this year. In that intervening period, the pecking order of the best medium format cameras has changed drastically, with the release of the Fujifilm GFX 100 at one end of the market and (bizarrely) a new entry level Hasselblad X1D II 50C at the other.

With the Leica S3 likely to command a price tag in the $20,000 region (twice that of the GFX 100), there's a question of where its 64MP sensor (which only barely gazumps the 61MP sensor in the Sony A7R IV) and DSLR technology (in a world where Fujifilm offers mirrorless medium format with in-body stabilization) fits into the equation.

Still, the new images leaked by Leica Rumors show that nothing externally has changed, and the specifications also leaked by the site largely reinforce what we knew about the camera.

The Leica S3 features a Leica CMOS sensor with 4.6μm pixel size and 62.7 total / effective megapixels (though image resolution remains listed as 64MP for both JPG and DNG), with no low-pass filter to provide greater sharpness (moiré is controlled via an external digital image processor).

What do you think – after 18 months is the Leica S3 too little, too late, or does it still have a place among the latest and greatest medium format cameras? Have your say in the DCW forums.