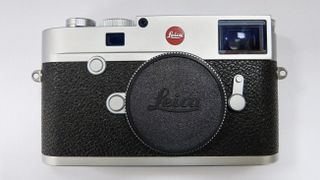 Hot on the heels of announcing its latest Monochrom camera, it has been revealed that Leica has registered a new camera: the Leica M10-R. And, according to reports, the "R" may stand for "resolution", with the camera packing a 47-megapixel sensor.

Externally, at least, the Leica M10-R looks identical to the Leica M10 Monochrom, with the exception of the new model name on the top plate and the reinstation of the signature Leica red dot on the front.

Internally, however, we're potentially looking at a very different beast – and not just because the new camera will shoot in color. Indeed, while the Monochrom possesses a 40.8MP monochrome sensor, it is rumored that the M10-R will feature a 47MP sensor.

This dates back to a report that first appeared last May, detailing a new high-resolution Leica that was purported to be announced in time for Photokina. "There could be a new Leica M10X with a 47MP sensor rumored for Photokina 2020 (not sure what X stands for - maybe 'xtra resolution')," wrote Leica Rumors last year.

"I guess I was wrong on the "X" part, but I was still correct on the 'Resolution' portion," the site posted in a new story. "Leica recently registered a new Leica M10-R camera with the FCC and I think the 'R' in the name stays for 'Resolution'."

Of course, the last camera that Leica revealed at Photokina was the 64MP medium format Leica S3 DSLR back in 2018 – and we're still waiting for that camera to materialize. We'd be very excited if the M10-R does indeed appear at the supershow in May, though – as will the purchasers of the Monochrom, who no doubt need a companion camera if they want to shoot color images.