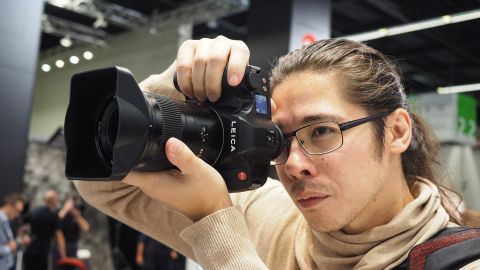 When we first saw the Leica S3 in 2018, the world was a very different place. In 2020, the Fujifilm GFX 100 is the new medium format measuring stick – and Leica's DSLR costs nearly twice as much for a much lower resolution sensor, which isn't even stabilized. Its 64MP output is almost outpipped by the full-frame Sony A7R IV, and somehow it's still using motion JPG for its video (uncropped medium format 4K though it may be). It's beautiful, it's capable, but it's a camera out of time – and with a price tag more than a little out of whack, even by Leica standards.

We first got our hands on the Leica S3 back in September 2018. At that time, its 64-megapixel sensor was still top of the food chain and its DSLR housing wasn't quite so quaint – but after a 17-month delay, the industry has completely transformed.

Of course, raw specs are the least important aspect of Leica products. Phase One’s system may have two-and-a-half times more megapixels, and Fuji’s may have an electronic viewfinder and in-body image stablilization, but they both lack one key feature: that little red dot.

Leica’s USP is and remains its luxury appeal. With the S3, just like every other Leica, the battle won’t be fought or won on specs; it’s all about that elusive "Leica magic". And in this respect, the S3 delivers in spades.

The Leica S3 was intended to mark an anniversary for the S-line, being revealed 10 years after the announcement of the S2 (at Photokina 2008). Despite being late, though, the S3 remains an evolution of its older brother, as well as the Leica Typ S (007) that succeeded it in 2016.

It retains the DSLR form and classic optical viewfinder of its forebears, but increases the sensor size 1.7 times from 37.5MP to 64MP. Again, though, this isn't true medium format but a smaller version; Leica's ProFormat sensor is 30 x 45mm, with a 3:2 aspect ratio (whereas Fujifilm and Hasselblad use a 44 x 33mm sensor with 4:3 ratio).

While the S3 offers uncropped, full-width, medium format cine 4K video, it unfortunately delivers it in the motion JPG format (most manufacturers have thankfully moved away from MOV files to MP4). It can record C4K at 24fps and 1080p up to 30fps, though its external recording output is limited to clean 1080p 8-bit 4:2:2 video via HDMI.

Leica has opted for rounder, fuller, DSLR-style ergonomics, rather than the sleeker and svelter form factor of most modern cameras. Still, while it's slightly larger than the average DSLR, the S3 is incredibly accommodating to your grip with plenty of welcome breathing room for your digits. the amount of space feels quite luxurious.

The generous size extends to the viewfinder; some may balk that it isn’t electronic, but it’s quite possibly the most perfect optical viewfinder we’ve ever used. Bright, spacious and gin clear, it’s feels genuinely pleasurable to hold to your eye and compose a shot.

Atop the body is a monochrome LCD display, inherited from the (007), which offers the most feedback you’re going to get on this camera; what few buttons and dials there are, save for the main power lever, are completely unmarked. Which might look cool, but won't help you much while you're trying to figure out what you should be pressing to make something happen.

All that said, it really is a beautifully designed camera and certainly feels sturdy enough to take some knocks in a pro environment – not that we'd be particularly keen for a $19,000 camera to take any bumps.

We used a pre-production body with a Summarit-S 35mm f/2.5 ASPH CS and Summarit-S 70 f/2.5 ASPH CS, the latter of which boasted quick and confident focus, and paired very well with the camera – sadly, we weren't yet allowed to take any sample shots.

The Leica S3 is everything you would expect of a new Leica; it’s as inspiring as it is impenetrable, and to fire off a few shots and hear that unique medium format “ker-chunk” punctuated by a pregnant pause is enough to make you wonder whether mirrorless really is the future… even if just for a few moments.

An everyday camera for everyday people it’s not, and it lacks both the mod cons and the necessary tech to justify its price point… but at the end of the day it’s got that little red dot on the front. For some people, that’s all that matters.

It’s not the biggest, the baddest or arguably even the best medium format camera. What it definitely is, however, is possessed of that “Leica magic”. The sensor isn’t stabilized, the viewfinder isn’t electronic and the buttons aren’t even labelled – but it’s an unadulterated joy to pick up and shoot with. Astonishingly tactile and pleasing to use, for some the intangibles may overcome the spec sheet omissions.