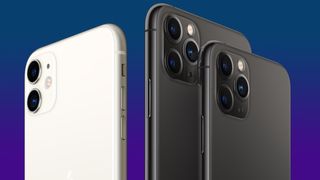 Once upon a time, 'new iPhone day' used to raise the bar. Every year the bar went up, the phones got better and public went wilder. Over the last few years, though, Apple seems to have actively lowered the bar – which is epitomized by the lukewarm launch of the iPhone 11.

Stripped of all context, the three new iPhones are perfectly capable smartphones. However, outside the Apple bubble and compared to what the other major manufacturers are doing, there's no getting around the fact that they are completely average.

The addition of a third camera to the iPhone 11 isn't so much a step in the right direction as a deliberate half-step. Apple knows full well that its competitors produce products with four cameras or more, products with time-of-flight sensors and products with resolutions of 64MP and beyond, all of which are revolutionizing not just smartphones, but changing the face of the photographic industry.

And yet, its latest releases are little more than a tacit, token gesture to progress. Not only is Apple content to no longer lead the way, it has now become the contrarian underachiever that kicks the ground and shuffles in the other direction nonchalantly.

Where is the firepower of the 64MP Redmi Note 8 Pro? Where is the 10x optical telescopy of the Oppo Reno 10X Zoom? Where is the 5G capability of the Samsung Galaxy S10 5G? Where is anything more than a rote press conference, the bare minimum updates, and the smug self assurance that the logo is more important than the product?

Where is the trailblazing, gun-toting, take-no-prisoners Apple? The Apple that transformed photography, the internet and social media all at the same time with the original iPhone? Yes, the world has changed and that kind of paradigm shift is no longer possible. However, there is such a profound lack of ambition displayed in the iPhone 11 that it genuinely feels like the company can't be bothered any more.

Seriously. It's not enough that the iPhone 11 feels like yesterday's technology; even the big exclusive lead title for the new subscription-based Apple Arcade is Frogger. FROGGER. The company is literally going backwards. And aside from playing camera catch-up with the rest of the industry, its biggest innovation is the bloody "slofie".

It feels curmudgeonly to criticize the new iPhones when they are, as mentioned, Perfectly Acceptable Phones™. But there's just no escaping that Apple has plummeted to a lowly fourth place for smartphone market share – and if it keeps this same lack of ambition, there's nowhere to go but down.

So, would the iPhone 11 be irrelevant without the Apple logo? Honestly, we're not even sure it's relevant with it.