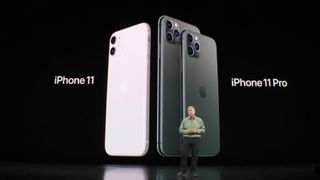 Apple has officially announced the iPhone 11, which comes in three varieties: the base iPhone 11, iPhone 11 Pro and iPhone 11 Pro Max. The latter two models are photography focused camera phones, boasting a triple-camera array that finally sees Apple catching up to the competition.

As has become par for the course, the iPhone 11 is more about iteration than innovation. While the new models feature a camera with an ultra wide-angle lens, and Apple is trying hard to make "Slofies" (slow-mo selfies) a thing, it's a far cry from the days when Steve Jobs would step on stage and turn the world upside-down with the phone he pulled out of his pocket.

So do the new iPhone 11 models have what it takes to rank among the best camera phones in this day and age? Let's meet the new family and see what it has to offer…

The leaked smartphone news was right on the money, as the base iPhone 11 (which effectively replaces the iPhone XR) doubles the cameras found on the entry level model.

It improves the front-facing selfie camera to a 12MP affair, which for the first time can capture slow-motion – and Apple was trying a little too hard to push slow-motion "Slofies" as a new thing.

The primary camera has a 12MP wide-angle 26mm f/1.8 lens, with 6 elements and optical image stabilization. The secondary camera is an all new 12MP ultra wide-angle 13mm f/2.4, with 5 elements and a 120° field of view.

This imbues the iPhone 11 with an optical 2x zoom out – and the user interface has been upgraded so that the ultra-wide view is visible outside the frame of the standard wide-angle lens, enabling you to see what the composition looks like without switching lenses – which is very cool.

Apple is boasting next-gen Smart HDR that adds "semantic rendering" for improved lighting, which uses multi-scale tone mapping that can treat highlights differently in different areas of an image.

Night Mode now activates automatically when the camera detects that it's dark enough, and makes use of adaptive bracketing – so it can use shorter frames if it detects subject motion and therefore avoid blur.

In terms of video, all the cameras (front and rear) support 4K at 60fps, though the front camera only has enhanced dynamic range at 30fps. A scrolling zoom wheel enables you to zoom seamlessly between the wide and ultra-wide lenses, and Apple is audaciously claiming that the iPhone 11 features “the highest quality video ever in a smartphone”.

It has an impressive 6.1-inch Liquid Retina display, but the company was coy on battery life, stating only that the iPhone 11 delivers 1 hour more than the iPhone XR.

This is the successor to the iPhone XS, which we ranked as the best iPhone for photography, and trumps last year's iteration by adding a third 12MP camera to the rear array.

With 2x zoom in and out, this makes the iPhone 11 Pro a 4x optical zoom camera phone – and one that Apple repeatedly suggested was actually a "professional camera", which is another audacious statement.

Audacious in a positive way is the company's new Deep Fusion technology, which will be available in an iOS update in the fall. This exploits the Neural Engine in the new A13 Bionic processor, and was described as “computational photography mad science”.

This mode shoots a total of nine images; four short images and four one-second images before the shutter is pressed, then one long-exposure shot when you fire the shutter. The processor then analyzes every shot and goes through them all, pixel by pixel, to optimize for detail and low noise. It seems like a very limited application feature, but a very clever one – even if the end result was the most bland picture imaginable of a bearded man in a cardigan.

Again, all cameras (front and rear) shoot video at 4K 60fps, but the selfie camera only supports extended dynamic range in 4K 30fps.

Again Apple was playing games with the phone's battery life, noting that the battery lasts 4 hours longer than the iPhone Xs. It did at least offer that the 5.8-inch Super Retina XDR display (apparently using the same technology as the Mac Pro) is 15% more energy efficient.

The iPhone 11 Pro is available in three matte finishes (midnight green, space grey, silver and gold) and will be priced from $999 (£809) when it ships on 20 September.

It will purely be down to personal preference whether or not you feel the larger screen is a benefit or not. Certainly it makes it easier to see and compose your shot, especially with the renewed focus on 4K video, and does come into its own when it comes to editing your images afterwards.

Once more, Apple's peculiar battery specs stated only that the new camera has 5 hours more battery life than the iPhone Xs Max.