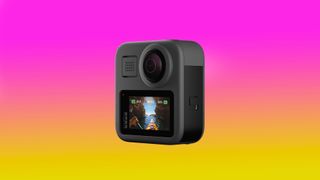 After a veritable torrential downpour of leaks and rumors, GoPro has finally announced the GoPro Max for pre-order (as well as the GoPro Hero8 Black). However, despite many of us having already seen the GoPro Max in stark detail, GoPro still managed to pull a few exciting surprises out of the bag in today's announcement.

When we first saw the leaked photos of the GoPro Max, we assumed that it would simply be a regular 360 camera - much like its predecessor the GoPro Fusion 360. However, one of the most exciting aspects of this announcement is the fact that the GoPro Max isn't just a 360 camera.

While 360 cams are undoubtedly fantastic pieces of tech, they can be slightly limiting. There are really only certain situations that you'd even want a 360 angle of view, so we can see many action sports enthusiasts hesitating before splashing the cash on such a niche product. If you only had the budget for a 360 camera, or an ordinary action cam, we think many would likely opt for a more normal angle of view.

GoPro Max: Three cameras in one

However, with the introduction of the GoPro Max, people no longer need to make that choice. With the option to shoot 360 footage with the dual lenses, or to shoot in the single-lens Hero mode, GoPro have given consumers "three cameras in one".

By expanding the GoPro Max's remit to enable vlog-like filming, we can see the Max being a very attractive proposition to influencers, vloggers and sports enthusiasts everywhere. With a front-facing screen and shotgun-mic performance, this GoPro is designed to do it all.

However, not only can you shoot in the single-lens Hero mode, you can also reframe your 360 footage into traditional videos and photos with the GoPro app. This means that you can simply shoot first and compose later.

With a chunky specs lists bursting at the seams with fun features, it's hard to choose which ones we like best.

One particularly interesting feature is the Max Hypersmooth function, or, as the GoPro calls it, "the new king of stabilization". Designed to deliver the smoothest video ever from a GoPro, this enables you to enjoy your activity to the 'Max' without ever worrying about the state of your footage. We have to admit that the sample videos that GoPro have provided are very impressive, and we're looking forward to getting our hands on one so we can test the stabilization for ourselves. However, it appears that you can only use this function in the Hero mode.

If you want even more filming choice, you can choose from four different angles of view. These include Narrow, distortion-free Linear, Wide and Max SuperView - which is GoPro's widest and most immersive view yet.

Here are a few more of our favorite new features from the GoPro Max:

• Max TimeWarp: Warps time in both 360° and Hero modes. In Hero mode, TimeWarp automatically adjusts speed based on motion, scene detection and lighting. It also changes from slow capture to real time in one tap.
• Premium Image Quality: 5.6k30 360° video, 1440p60 and 1080p60 Hero video, 5.5MP Hero photos and 6.2MP PowerPano photos.
• Premium 360° + Stereo Audio: Six microphones capture true-to-life 360° audio and is designed to deliver the best stereo sound ever from a GoPro.
• Directional Audio: Directional audio in Hero mode enables you to prioritize sound from either side of the camera.
• 1080p Live Streaming: Capture in Hero mode and share with HyperSmooth stabilization.
• Rugged and Waterproof: The GoPro Max is waterproof without a housing to 5m.

Considering that the GoPro Max is designed to be both an action camera and 360 camera in one compact package, we can understand its pricing. In fact, the GoPro Fusion 360 appears to have been originally released for around £649 / $699, so consumers are actually enjoying a significant price drop with the GoPro Max.

The GoPro Max is available for pre-order now (with a SanDisk Extreme 64GB microSDXC thrown in free), and begins shipping on 25 October.