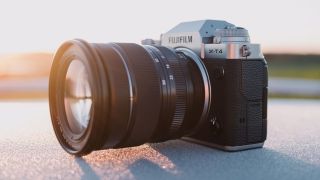 The Fujifilm X-T4 is the company’s latest flagship mirrorless camera, and it’s aimed at expert and pro photographers with new features, performance and capabilities that look set to keep Fujifilm’s top APS-C mirrorless camera right at the head of the pack.

Experts and enthusiasts looking for an affordable first-rate mirrorless camera may just have found it. The X-T4 has the second-highest resolution of any APS-C camera, powerful burst shooting modes and leading edge 4K video features. It looks certain to make our list of the best mirrorless cameras to buy right now, the best cameras for enthusiasts and will definitely be one of the best Fujifilm cameras for experts.

The Fujifilm X-T3, launched back in September 2018, could make the same claims, but the X-T4 improves on its predecessor in several key areas.

The biggest story with the X-T4 is the inclusion of IBIS (in-body stabilization). This is not the first Fujifilm X-series camera to have this, as it was introduced with the pro-orientated Fujifilm X-H1.

Development of the X-H series appears to have taken a back seat for now, but the lessons learned from its stabilisation system have been put to good use – the IBIS unit in the X-T4 is smaller, lighter and simpler, which means this camera is only slightly larger than the previous X-T3, and a full 30% smaller and 20% lighter than the X-H1.

The new IBIS unit uses ‘magnetic springs’ rather than mechanical coil springs and a more efficient design that offers 5-axis stabilisation and up to 6.5 stops of shake compensation with 18 different non-stabilized Fujinon lenses. We’ve seen figures this high quoted before, but only with dual in-body and lens-based stabilization. Fujifilm told us the IBIS will also work with third-party lenses, but only with 3-axis stabilization.

Fujifilm X-T4 gets a vari-angle screen

The X-T3 had a handy tilting screen, but the X-T4 goes a step further with a fully variable-angle screen that flips out sideways, can be angled in practically any direction and can also be closed ‘shut’ against the camera body – perfect for photographers who like the ‘hidden LCD’ idea of the X-Pro3 but prefer a more mainstream camera design.

It is not, however, the 16:9 ratio screen seen on the new Fujifilm X-A7 and X-T200 models, but a conventional 3:2 ratio 3-inch screen. Fujifilm says the larger screen would not have left enough room for a D-pad controller on the back of the camera.

The new shutter unit in the X-T4 is 30% quieter than the old version and offers a higher 15fps maximum burst speed than the 11fps achieved by the mechanical shutter in the X-T3. As if that wasn’t enough, the shutter life has been doubled, from 150,000 actuations to 300,000.

The new shutter is certainly quieter, but the X-T4 does not have the ultra-soft shutter release of the X-H1. That will be a relief to those who found the hair-trigger reactions of the X-H1 a bit hard to live with.

The X-T3 had few weaknesses, but the battery life was not a strong point. With a maximum of 390 shots on a charge, it was starting to fall behind some rivals. With the X-T4, however, Fujifilm has introduced a new 2,200mAh lithium ion cell with a life of 500 shots in normal mode and 600 shots in ‘economy’ mode.

There’s also a new VG-XT4 battery grip for this camera, which holds a further two NP-W235 cells to offer up to 1,450 shots. With the grip fitted, you can charge all three cells via a single USB-C port – though you’ll need a USB-C output designed for power delivery to get usable charging times.

Fujifilm has added a new ETERNA Bleach Bypass film simulation mode with hardened tonality and reduced saturation, to mimic the popular cinema look. There’s also a new AF algorithm which improves face and eye detection, though the X-T4’s AF system is otherwise the same as the X-T3’s.

The X-T4 now has a stills/moving switch on the top of the camera and independent still and movie settings modes. The camera can now shoot using the MP4 video format, and as well as having Fujifilm’s F-Log mode the X-T4 has an F-Log View Assist option for visually checking footage as it’s being shot.

The X-T4 has an external mic socket, while headphones can be attached using a small adaptor included with the camera – the VG-XT4 grip also has a headphone socket.

Interestingly, Fujifilm says it has no plans to discontinue the X-T3, which will sell alongside the X-T4 at a lower price point. The X-T3 does share the sensor and AF technology of the X-T4 and much of its 4K movie capabilities, so it remains an attractive buy in its own right.