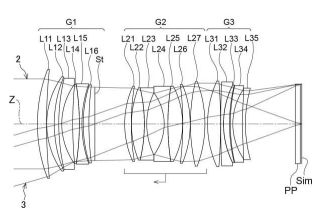 Fujifilm has designed the fastest medium format lens ever – a GF 90mm f/1.4 optic for its GFX medium format cameras, which translates to a lightning-fast f/1.11 lens with a 71mm focal length in equivalent 35mm terms.

It was only last week that Fujifilm made waves by announcing the GF 80mm f/1.7 R WR – which at that point was the fastest commercial medium format lens in the world, at an equivalent 63mm f/1.3. The GF 80mm has been officially added to the Fujifilm GF lens roadmap, and is due for release in 2021.

The new GF 90mm f/1.4 is obviously still in the development phase, so it may be some time before it reaches production – if indeed it ever sees the light of day (the manufacturer outright cancelled another recent superfast lens, the Fujifilm XF 33mm f/1.0, after it reached the public prototype stage).

Still, the Japanese patent filing – spotted by Hi Lows Note (by way of Mirrorless Rumors) – is a tantalizing glimpse of what might come. The patent describes a lens with a true focal length of 88.78 mm, an aperture of f/1.44 and a 32.8° angle of view.

Aside from the Fujifilm GF 80mm F1.7 R WR, the fastest medium format lens on the market is the Hasselblad XCD 80mm f/1.9 – making the GF 90mm f/1.4 the speediest by quite some margin.

Some will quarrel that the mirrorless medium format employed by Fujifilm and Hasselblad cameras (43.8 x 32.9mm, equating to a 0.79x crop) are smaller than the full-frame medium format used by true 645 cameras like the Phase One XT (56 x 41.5mm, 0.62x crop). Even so, the fastest Schneider Kreuznach lenses for the Phase one top out at f/2.8 (an f/2.2 equivalent in 35mm terms).

Indeed, you have to look back to the classic Mamiya Sekor 80mm f/1.9 lens for a medium format lens as fast – and that still isn't quite as quick as Fujifilm's new patented lens, even in equivalent full-frame terms! (Obviously we're not counting non-commercial lenses like the Carl Zeiss Planar 50mm f/0.7, as most of us don't have the budget of NASA or Stanley Kubrick!)

The 7 fastest lenses in 2020 – break the speed limit with glass as fast as f/0.75
Fujifilm GF lens roadmap: all the current and planned lenses for the GFX system
The best medium format camera in 2020: big sensor cameras for experts and pros