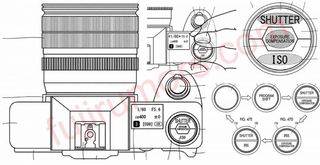 With three new patents filed within the past two months, it's clear that Fujifilm is eager to innovate – and it's not exactly hanging around. Fujifilm cameras have always been known for their analog-inspired designs, so it's interesting to see the company expand into more experimental areas.

Website Fuji Rumors recently reported that Fujifilm has patented a touch sensitive top dial that will give you access to different settings, depending on which part of the dial you touch.

This is certainly an interesting concept, but it does bring up a few questions. What happens if you're wearing gloves? Or if it's raining? Or if you're working in extreme temperatures?

It seems likely that this design would be implemented in the GFX line (Fujifilm's medium format cameras), so perhaps the company is expecting most users to work in climate-controlled studios. However, we would be interested to see how well this feature would work for landscape, wildlife or sports photographers.

Even on a day-to-day practical level, the beauty of physical buttons and dials is that you can use tactile memory to change your settings without having to look at your camera. Would a touch screen really give you the same ease of use?

However, this top dial may never come to fruition. The nature of patents is that they're concepts the company is working on – they may never actually make it into a product. Plus, this isn't the only patent Fujifilm has recently filed; it appears that the company has zeroed in on the top right-hand side of the camera, as both of the other patents are focused on the top LCD screen.

The first of these two patents was made in June for a tilting top LCD screen, which would enable you to use Live View and check your settings at the same time. We could see this being particularly useful for portrait or still life photographers who like to work away from the viewfinder.

The second patent was filed in mid-July and showed a touch sensitive top LCD screen. Fuji Rumors reports that "if your finger touches the top LCD panel, the command dial is activated and you can adjust your settings. If no finger is on the touch panel, then turning the dial won't change anything". This will prevent settings from accidentally being changed if a dial is nudged once your finger is on the shutter button.

No matter which design Fujifilm eventually ends up pursuing, it seems clear that it's very interested in exploring avenues for the modern-day user who's tech-savvy and confident with touchscreens. However, we just hope that it doesn't stray too far away from the film camera-inspired designs that have won it such a passionate fanbase.